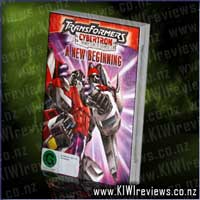 Disclosure StatementFULL DISCLOSURE: A number of units of this product have, at some time, been supplied to KIWIreviews by the company for the purposes of unbiased, independent reviews. No fee was accepted by KIWIreviews or the reviewers themselves - these are genuine, unpaid consumer reviews.
Available:
July 2008

In the aftermath of the Energon Crisis, Optimus prime and the Autobots face the greatest danger in all eternity, a menace which threatens not only the survival of the transformers, but the very existence of Cybertron and the universe itself.

While the Autobots embark on a quest to ensure the survival of the Cybertronian race, the Decepticons are on a similar mission, but one of evil, as they seek the power to rule the universe forever.

Keeping the same classic style we older Transformers fans adored in our youth, but with all new action-packed plots that appeal to the younger generations, this is an excellent progression of the Transformers universe.

After nearly getting creamed in the Energon sagas, the Autobots are once again trying to recover enough to do their self-imposed duty of protecting the innocent and life on Earth from the various disasters lurking out in the depths of space... and right here on Earth. Of course, the Decepticons aren't making it easy... nor are the fundamental rules of the universe when they drop a Black Hole right where it's going to cause the most damage... not only to our little blue ball of rock, but also Cybertron, the home planet of the Transformers themselves.

Overall, with the introduction of The Speed Planet, where going fast isn't just fun, it's a way of life, the action is ramped up a few thousand revs more, and the thrills and spills are worlds bigger. Add to the mix the mysteriously powerful Cyber Planet Keys, which have the ability to enhance and amplify their powers, both races of Cybertronians have a new prize to war over.

The BBC's longest running comedy series, Last of the Summer Wine, follows the comic trials and tribulations of life for a group of retired friends.

Here we are again in the beautiful Yorkshire village of Holmfirth, where it's time to catch up with our three mischievous, merry men. Clegg is drinking far too much homebrew for his own good, Foggy, on the other hand, isn't full of beer, but brilliant new ideas, such as amazing new bicycle ... more...