ProdID: 1878 - Beauty and the Beast
Performed by Abbey Musical Theatre 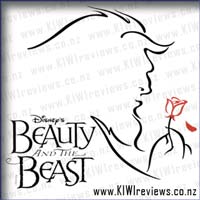 Disclosure StatementFULL DISCLOSURE: A number of units of this product have, at some time, been supplied to KIWIreviews by the company for the purposes of unbiased, independent reviews. No fee was accepted by KIWIreviews or the reviewers themselves - these are genuine, unpaid consumer reviews.
Available:
Aug 1st to Aug 16th 2008

Beauty and the Beast product reviews

One of te most popular and enchantingly romantic stories ever told comes to life in Disney's multi-award winning musical!

This classic French fairy tale tells the story of a prince who has been turned into a beast, and Belle who agrees to live with him in exchange for her father's freedom. She does not know it but the Beast is under a terrible spell and to break the spell he must win the love of beautiful Belle before the last petal falls from an enchanted rose, or he will remain a beast forever.

Be our guest to a world of enchantment, With its incomparable blend of magic and music and fantastic costumes designed by Weta Workshop, Beauty and the Beast will enthral both young and old as it reminds us that true beauty shines from within.

Brought to you by The Abbey Musical Theatre and Regent on Broadway promotions.

In some ways, this show was quite a disappointment. For starters, there was the usual sound problems (will they EVER get this sorted so they can at least have one show without the extra crackles, squeals etc and where you might actually be able to hear ALL the performers??), plus poor harmony in quite a few of the songs, and just a general lack of the usual "oomph" that I've come to expect with Abbey Musical Theatre performances... leaving me feeling that the show dragged on a bit, and rather keen for the final curtain close and the lights coming back on.
This is not to say that there weren't SOME performers that stood out... I found the most entertaining parts of the show were the scenes containing "Cogsworth" and Lumiere" (I've kinda come to expect giggle worthy moments when Scott Andrew is on the scene though!). Their banter was rather amusing, and their performances reminding me quite strongly of Disney's original Cogsworth and Lumiere from the movie. "Mrs Potts" was another character who closely resembled the original in the way she was performed, thanks to the talented efforts of Sue Philips (even her voice made me think of Angela Lansbury, the voice of the 1st "Mrs Potts").
It was a shame that young Oliver Lodge who played "Chip" was severly let down by the sound problems, so that maybe the people in the front row could hear him, but anyone further back only heard a quiet murmer... but I was definitely pleased to see that at least they sorted out the sound towards the end long enough that you could hear Oliver after Chip was once more human. I did wonder just how comfortable it was tucked up in the "table" though. Definitely hoping to see this youngster in other shows where hopefully he'll get to be heard!
Richard Rewa was up to his usual high standards though, being thoroughly enjoyable as the idiotic, comical side-kick of "Gaston", "Le Fou". And of course Dean O'Flaherty (another of my favourites) was pretty good as "The Beast", although I did find his performance a bit on the quiet side, in comparison to his other shows. Louise Flynn, playing the "Beauty ("Belle")" to Flaherty's Beast, was also rather enjoyable, with a voice that holds a lot of promise for future shows. There were the occasional moments where her performance seemed a little "over the top" maybe, but only a little, and that could be put down to Opening Night jitters I'm guessing. Yet another I'll be keeping eye out for in any upcoming shows though.
Mostly, a bearable show but lacking in areas, which stopped it from reaching the usually high standards of Abbey Musical Theatre and Regent performances. If you have kids, they'd probably find it more enjoyable... but adults may find it not quite worth the money spent on the tickets.

There are some shows that you can get away with on a shoestring budget, and some that just fizzle unless they have the gross domestic product of a small African nation for operational costs... and I am sorry to sat that despite some stunning sets, some utterly mind-blowing costumes, and some really impressive new talent appearing, this show was of the latter type.

However, I want to focus the first part of this review on the positives, simply because they are far more worth mentioning early on.

The costumes, designed by the talented crew at Weta Workshop, were beyond words. Particularly impressive was 'The beast' (played by the ever-talented Dean O'Flaherty, and 'Lumiere', played by the always-entertaining Scott Andrew. Scott's flaming apendages looked close to torching a few backsides in some scenes, but thankfully no heated heinies occured.

The special effects looked spectacular, even if the explosions did trigger more than a few soggy britches in some of the younger audience members. (It's an interesting sign when the first departure doing the soggy-bum waddle is less than 30 seconds after the first firework explosion, and is followed by three more waddlers just after the second explosion a few moments later.) My only *tiny* niggle with the fireworks came right at the end, with the big 'transformation' scene where the smoke generated by the fountain firework drifted past and it reeked! (Strangely enough, with a hint of stage ether mixed in too... I would have thought that a recipe for a fire department call-out, but...) Despite this, all very impressive and shocking in the approporiate places.

Performance highlights were few, but notable. As mentioned, Dean O'Flaherty as 'The Beast'... stunning and well up to his usual standard despite the seemingly ever present soundboard issues whenever we see an Abbey show hosted in the Regent on Broadway theatre. Apparently this is something to do with a compatibility issue relating to the radio mics, according to one crewmember I spoke to. Another stunning performance came from Louise Flynne as 'Belle'. Though she is a veteran performer and has quite the portfolio, I haven't had the pleasure of seeing her perform until now, and I can easily see how she has succeeded so well to date.

Though for many years I was never really one for musicals, good songs always appeal to me. My favourite song in this show simply had to be "Be Our Guest". Toe-tapping lyrical gold, it was, and very well performed by what had to be the entire cast. Lights, costumes, song... it was all on and all go. I loved the set.... though it was actually quite sparce, it gave a far more 'filling' impression, especially once the stage was full of animated cutlery and serving dishes.

Overall, this show is most definitely better aimed at a younger audience, so such late showings might not have been the most effective timeslot planning. Many a yawning, grumpy sprog departed that night, and I overheard more than a few parents wondering "...why a kids show was in an adult timeslot..." (or words to that effect. This was just the comment that summed it up best in my mind.) Full of subtle, and not-so-subtle, puns, particularly when it comes to character and location names, this show does have a few more layers to it than many would at first see, so paying attention would be advised. Forgiving the bane of the sound engineers, who did their level best to cope, the show wasn't really *my* thing, but it is one I would bring my 8yr old son to if it was on a weekend afternoon.

One little suggestion that may, or may not, work for the sound crew... plant a couple of crew in the front row with parabolic mics. If the radio mics fail, ramp up the input on the parabolics and see if you can salvage the sound that way... even crappy sound is better than hearing only one side of a 3-way conversation.

Score: 10.0
Product reviews for listing 2029: Jane and the Dragon - Last of the Dragon -  Type of Show: Children's Animated Series

Twelve year old Jane is a strong-willed girl who defies convention to follow her dream of becoming a knight. Brought up in the Royal Court to be a lady-in-waiting, a combination of determination and good fortune has made her dream come true.

Jane, her clumsy friend Dragon, and the many other eccentric and endearing characters who live in the castle find themselves a series of comical adventures, while teaching children the importance ... more...