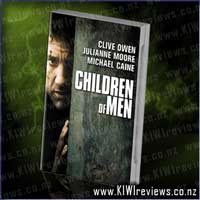 No Children | No Future | No Hope.

In the Year 2027, eighteen years since the last baby was born, disillusioned Theo (Clive Owen) becomes and unlikely champion of the human race when he is asked by his former lover(Julianne Moore) to escort a young pregnant woman out of the country as quickly as possible. In a thrilling race against time, Theo will risk everything to deliver the miracle the whole world had been waiting for.

My husband was really interested in watching this and so we finally got around to watching it, after he bought it on DVD.

The future is bleak in a world where there hasn't been a baby born in 18 years. Theo is plodding along with his life when his ex-wife comes to him asking for his help, and thus he finds himself trying to get the first pregnant woman in 18 years to somewhere safe. There is a great sadness to this movie, and also some good action and suspense to this movie.

Clive Owen does a great job as Theo, in fact all the acting is well done, I just don't find it to have a good overall flow and I just can't enjoy it enough to justify watching it often. The special effects are good though a lot of the movie relies upon the very bleak landscape that the world has become since babies became a thing of the past, literally. While that isn't a bad thing it does mean that it isn't a movie that I want to watch too often.

A good story, a rather bleak future that one hopes doesn't happen. This is a must view for at least once.

Set in 2027, there have been no births for the last 18 years and the last born child, aged 18 is murdered. Theo is a most unlikely hero in this story and is only brought into the situation of trying to get Kee to safety thanks to his ex Jules, as he is the only one she trusts.

I really struggled to get into the movie in the first half hour, watching something that looked like it should be on the evening news in Iraq. I would normally change the channel or turn it off in a lack of interest, that is until they are driving along the road and Jules gets shot.

The movie had its ups and downs and ended on a high note but wasn't my cup of tea. The acting was fantasic and looked just like a "real life" filmed documentary. There was appropriate music and sound effects through out the movie, which I enjoyed.

I was disappointed in the way the movie ended and would have liked to see what happened to Kee and the baby from there, rather than just see it end with them sitting in a row boat in the middle of the ocean next to a bouy with the boat coming to save them in the distance.

A lot of you will like this movie and need no help to watch it, where others may need to push themselves past the first half hour, but anyone who has seen it will not regret it.

This is actually one of those films that I initially had no interest in watching because I heard from word of mouth that it wasn't so great. I was wrong to take this advice on so many levels.

The film begins with the world in crisis. No children have been born for over 18 years. The youngest human being on the Earth - an 18 year old man - has been murdered. Theo (Clive Owen) is an office worker out buying coffee and narrowly escapes being a victim in a terrorist bombing supposedly orchestrated by Fishes, a cell of equal rights activists. Welcome to London, 2027. Theo hates his life and considers it highly monotonous apart from his regular visits to his eccentric friend Jasper (Michael Caine). One day on his way to work he is abducted in the street and taken to meet with the leader of Fishes, his old flame Jules (Julianne Moore) who asks him to use his connections in the government to transport a young woman - Kee - to the coast and onto a ship out of Britain. But when Jules is killed and Theo discovers Kee is pregnant he must avoid a double cross and decide what to do while being pursued by the remnants of the Fishes and the military.

The setting for this film may be instantly recognizable to some as a very similar dystopia to Orwell's '1984' but with more of a focus on the issues of today. Terrorism, freedom of speech and discrimination are a few of them. There is also a facist overtone to the overall feel, much like in 'Starship Troopers' but a lot more harsh. Billboards in the streets have things like "if its suspicious, report it", "avoiding fertility tests is a crime" and "report all illegal immigrants". Doomsday cults are rife. It paints a very bleak image of a possible future for humanity.

The film is raw, gritty and realistic and carries the air of a war documentary. Minimal use of CGI and the use of long takes (a shot that uses the same camera for a length of time instead of cutting) throughout, including several more than three minutes in length show a masterful combination of skill from the cast and crew that also reinforces the feel of a documentary.

Apart from the long takes the film is filled with other very striking shots. A shot that stood out to me particularly is one where Theo and another character are looking out a window at Kee who is sitting on a childrens swing set. The camera sits back in a wide shot as Theo looks on from the extreme right of the frame and we see Kee through a hole in the opaque glass of the window near the centre. One that I just have to mention is the middle of a war zone and Kee and Theo are walking through it with the baby and everyone just stops and looks. Civilians, soldiers, Fish, everyone. Its one of the more emotional scenes I've seen in a film of this type and it really hit me.

'Children of Men' has a great soundtrack thats is basically in two halves. It's a mix of inspired but not too overpowering music from a variety of genres, and a haunting musical score.

The acting is fantastic and above all it is believable. Theo is an anti-hero as opposed to a true hero. He is reluctant to take on his role as the protector of Kee and it takes a hefty bribe to even start to bring him round to the idea. Clive Owen really shows off what he can do in this film and makes Theo real, at least for me anyway. Michael Caine brings a whole lot to the film. His character is both the comic relief and the most intelligent character of all of them. His performance is reportedly based on John Lennon and he certainly looks and acts the part. I was very surprised when Julianne Moore popped up in the film. I honestly don't know the last film I saw her in. Her small amount of screen time isn't wasted and a lot is told about her and her connection to Theo with very few lines.

This film won't be for everyone but it is one of the best sci-fi films I have seen. In my opinion there is enough substance in this film to satisfy every viewer if they keep watching until the credits start rolling.

Every Hero Has a Dark Side

In Dark Phoenix, the X-MEN face their most formidable and powerful foe: one of their own, Jean Grey. During a rescue mission in space, Jean is nearly killed when she is hit by a mysterious cosmic force. Once she returns home, this force not only makes her infinitely more powerful, but far more unstable. Wrestling with this entity inside her, Jean unleashes her powers in ways she can neither comprehend nor ... more...