« Doctor Who - The Five Doctors review 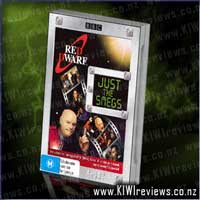 Disclosure StatementFULL DISCLOSURE: A number of units of this product have, at some time, been supplied to KIWIreviews by the company for the purposes of unbiased, independent reviews. No fee was accepted by KIWIreviews or the reviewers themselves - these are genuine, unpaid consumer reviews.
Available:
June 2008

Just the Smegs is an unmissable chance to look behind the scenes of the Red Dwarf universe and witness the cast and scenery fall part.

SMEG UPS:
Kryten (Robert Llewellyn) the 4,000 series sanitation mechanoid, takes you on a journey into a dimension of fluffs, bloopers, hitches and smeg ups that lead to one inevitable response: "Cut!" A dimension where the crew forget their lines and giggle uncontrollably, where props fall apart and doors refuse to open, where model space ships self-destruct when their strings break and chameleonic mutants can't get anything right.
Featuring outtakes from Series IV to VI, in this collection Kryten reveals the answers to ten most-asked questions, and the original ending for Series VI.

SMEG OUTS:
The hilarious sequel to Smeg Ups. Join Kryten (Robert Llewellyn) and Lister (Craig Charles) as they take you on a journey into a plane of reality no humanoid has previously been allowed to see, a dimension of cosmic cock-ups and ballistic blunders where no-one can remember their lines and nothing goes right, ever. Smeg Outs also includes the cock-ups from the first three series, the original 'Tongue Tied' song, the most popular Red Dwarf scene ever, and footage from the 1995 Red Dwarf convention.

Being a Dwarfer from way back it was a pure joy to sit down and revisit with the marvelous team that was responsible for the cult classic Red Dwarf and as always watching their goofs, blunders and flubs is sometimes better that the actual show. With both the Smeg Outs and Smeg Ups bundled together on this DVD plus a stunning bundle of extras such as the full music video to 'Tongue Tied' as well as the home video versions of the outtakes from series VII & VIII.

As with all blooper shows, you have your standard fare of flubbed lines, uncooperative props and of course the core of any blooper/gag reel the SOoG or Sudden Outburst of Giggles. These in themselves are usually funny as hell, but add in the Red Dwarf factor and you can be sure that hilarity will ensue.

I felt that they made the perfect choice in deciding to have Kryten act as host and as always Robert Lewellyn does superbly.

Overall if you're a Dwarfer get this for yourself, of if you know someone who is buy it for them, they'll love you for it.

David Attenborough's Life in Cold Blood is the final chapter of his epic overview of life on earth.

Reptiles and amphibians ruled the world for nearly 200 million years and today there are still over 14,000 of them. Some are huge, the deadliest creatures on earth. Some are tiny, among the strangest to be found anywhere. Together, they not only outnumber mammals or birds but in their colourful variety and extraordinary ... more...