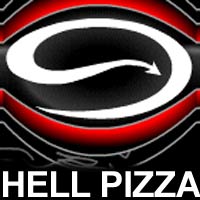 Hell first began in early 1996 next to Victoria University, and since then has gained a huge following in Wellington. After a little creative advertising (see our website's movie section..) the name Hell started to gain a reputation.

New owners, new way of doing things, new attitude and vibe, lower prices... all these things and more add up to making the local Hell Pizza a much more appealing place to dine!

With a much-needed lowering of prices and overall improvement in the business as a whole, I was tempted back in to give this place a try... and I was so glad I did!

Deciding to try out their pastas, which a local businessman I know swore blind was the best there was to be had, I found myself sitting down in front of a tray of the most delightful smelling pasta and sauce, and chatting to the proud new owner. It was soon agreed that we would give them another go... and so, when the time came...

Once again we ordered a 'Lust Pizza' as comparison, and I found the difference so noticable... literally, I was drooling as I reached for a second slice, fighting off a few other hands for the piece with the most pepperoni on it.

Only the quick, and the unsatisfied around here mate. The garlic bread we got didn't fare any better either. Being utterly yummy and more'ish, I swear there were sonic booms as hands cleaved through the air at break-neck speed in an attempt to be one of the glorious, victorious 4 who got a piece.

Overall, my views on this place have gone up considerably, and I will definitely be considering going to next time the tummy rumbles.

Very expensive pizza but quality is good so prepared to pay a bit more. Great that they have a few vegetarian options. I find it hard to find a takeaway place with more than just 1 thing to choose from. My partner ordered a 'creator' which ended up with all of the toppings she chose except for the meat - so she inadvertantly ate a vegetarian pizza as well. I went onto the Hell Pizza website and added feedback about the missing meat. That was months ago and I never heard back which was pretty disappointing. Their dessert pizzas are divine - especially the berry/chocolate/custard one. Very yummy.

And was impressed, but not overly so. I ordered a Mordor, and man, I gotta say the venison Pepperoni was most unusually tasty indeed! Spicy BBQ sauce, chicken, bacon, capsicum and onions as well... all good stuff!

Overall, ummm... well, the portions were a tad undersized for what the pricetag would lead a first-time buyer to believe. Now, you could say that Quality Costs, and that's a valid statement, you could say that the bigger Pizza companies are underpricing to reach a wider consumer base, and that's just as valid, but at the end of the day I felt a bit ripped off. Full, but a bit more out-of-pocket than I should have been for what I got.

The event was my niece's birthday, with 6 hungry adults and 2 kids to feed. I had been to Hell pizza on a different occasion, and had really enjoyed it, so suggested we order that. Hell Pizza have an awesome website (www.hell.co.nz) where you can order online. Logged on, followed the instructions, and in no time our order was placed: One 'Trouble' pizza (camembert, chicken, bacon, onions, pineapple, salami, with free additional topping of cranberry sauce) One 'Cursed' pizza (chicken, smoked cheddar, bacon, gherkins, ham, onions, honey mustard), one 'Mordor' pizza (chicken, bacon, capsicum, onions, venison, pepperoni, bbq sauce) and two boxes of 6 pack chicken tenders. Was told our order would be 30 mins away. Great!

30 minutes later our food arrived. Yumm-..the smell coming out of those boxes was out of this world. Three delicious looking pizzas, and two boxes of chicken tenders. As I mentioned before, the chicken tenders come in boxes of 6. There were 8-9 in each box. Fantastic. So far so good-.but it gets better. Sampled a couple of their chicken tenders, they were juicy, golden and perfect. You could tell it was real chicken too...not the processed stuff you get at most places. These tenders were so delicious I could have eaten the whole box.

Next was the 'Trouble' pizza. The toppings were absolutely crammed on, the camembert you could actually see the huge big rounds which had melted onto the topping. Really tasty - was my favourite pizza.

Next was the 'Cursed'. This was great too, the smoked cheddar really adds a different flavour, and the honey mustard and gherkins combine to give you a taste explosion unlike any other.

Next was the 'Mordor'. I was too full to eat a whole piece, so my partner unwillingly gave me a bite of his (he didn't want to share!). Was also really good, meat was crammed on, but this pizza is quite spicy, so if you don't like spicy pizza steer clear of this one.

Well what can I say....I can't fault Hell Pizza even if I tried. Generous toppings, awesome combinations of flavours, fresh as ingredients, free additional toppings (as many as you want, and it's FREE), easy online ordering, a vast menu range and not too bad pricewise either. All in all make for a great meal. Great portions too - what we ordered fed 6 adults and two kids for dinner and there was two pieces left over. You can dine in at Hell Pizza too if you wish.

If this review hasn't already got your mouth watering, here are some other menu choices to tempt your taste buds: Spicy pork spare ribs, garlic bread, various gourmet salads, delicious looking pastas, desserts to die for including cheesecake, and dessert pizzas ('Unearthly pizza = berries, banana, 3 diff types of chocolate and custard). Haven't tried this but am looking forward to it. Their website has a full menu list.

Our take on a traditional English smoked cheese which is bold, rich and creamy