ProdID: 1797 - Next
Directed by Lee Tamahori 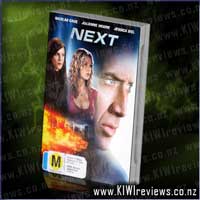 Disclosure StatementFULL DISCLOSURE: A number of units of this product have, at some time, been supplied to KIWIreviews by the company for the purposes of unbiased, independent reviews. No fee was accepted by KIWIreviews or the reviewers themselves - these are genuine, unpaid consumer reviews.
Available:
February 2008

If you can see the future, you can save it.

Las Vegas showroom magician Cris Johnson has a secret which torments him: he can see a few minutes into the future. Sick of the examinations he underwent as a child and the interest of the government and medical establishment in his power, he lies low under an assumed name in Vegas, performing cheap tricks and living off small-time gambling "winnings." But when a terrorist group threatens to detonate a nuclear device in Los Angeles, government agent Callie Ferris must use all her wiles to capture Cris and convince him to help her stop the catastrophe.

I admit to being an utter sucker for a movie that involves precognition... especially when it also includes the yummy Jessica Biel.

Not being a huge fan of Nicolas Cage, ever since I saw him over-acting in 'Snake Eyes', I had to admit I wasn't entirely sure whether I should watch this or not... but by Grapthar's hammer I am glad I did!

The premise is simple... this guy can see into the future, but only 2 minutes ahead, and only as it would appear to his own eyes. If someone was to walk past him and trip over, 2 minutes from the 'now' he would get a flash of it, and 2 minutes later be in just the right place to catch said fallen angel... or not, depending on the situation. Now what gets me about this is that by that theory, if he got a premonition 2 minutes from 'now', he could see it now, thus in effect seeing 4 minutes into the future... and by stacking this a few hundred more times, he could see as far as he wanted...

This, it turns out, is not how the scriptwriters see things, and instead give him a couple of really long 'flash-forwards' to cope with... but I so love how he uses them. My favourite example of how much fun even short-term precog could be: (at 41min:45sec) "Wow, that was incredible." "What was?" "This..." followed very closely by the scene of a rather energetic but entertaining run down a mountainside... You'll have to watch to see what I mean.

There were a few little goofs and blunders, but surprisingly enough they are very few, far between, and subtle enough to not really notice unless you have a photographic memory, and no life to speak of. I was very pleased by this, because after the utter mess Lee Tamahori made of the James Bond movie "Die Another Day", it was a real treat to see him make such a stunning success of this movie. Frankly, I am almost starting to respect his work again!

Forgiving the goofs, the movie held together really well, showing a fairly seamless, consistent internal frame of reference that worked really well with the plot. The special effects were pretty tame except for a couple of scenes near the end that really highlighted the whole parallel-paradox aspect of a precog who changed actions based upon the visions, and thus changed the future worldline. Tamahori seriously topped anything he has ever done in the past with those two scenes alone, IMHO.

Overall, a spectacular movie, with everything going for it, from plot, to cast, to execution... I couldn't find real fault anywhere and would have given it a full 10/10 if only that slight 'thing' with the duration of the precognition had been fully resolved... however this didn't stop me from paying good hard cash to see it at the cinema 3 times, and then again on DVD a full 8 times so far... and I have only had the disc for a couple of days!

Aicha is a hot blooded Turkish-Danish teenage girl whose one great passion is martial arts. She watches kung fu films constantly, mimicking the moves of the stars she idolises and training in a casual, girls-only after school club. Or rather, she trains there until her hot temper gets her kicked off the club.

Her school coach, recognising Aicha's natural talent, suggests that she enlist in a local, elite level club - where the Iron ... more...