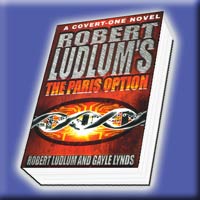 Disclosure StatementFULL DISCLOSURE: A number of units of this product have, at some time, been supplied to KIWIreviews by the company for the purposes of unbiased, independent reviews. No fee was accepted by KIWIreviews or the reviewers themselves - these are genuine, unpaid consumer reviews.
Available:
February 2003

The third novel in the hugely successful COVERT-ONE series.

A terrible explosion destroys the Pasteur Institute in Paris, leaving cyber-wizard Marty Zellerbach in a coma, and one of the world's top computer scientists - Emile Chambord - missing. Although a terrorist group takes credit for the bombing, American and British officials wonder whether there might be even more sinister forces at work.

When Lt. Col Jon Smith learns his old friend Marty is seriously injured, he plans to leave for Paris immediately. But then Nathan Klein, the shadowy chief of Covert-One, shows up with an assignment - find Dr. Chambord who, it transpires, has built the world's first working molecular computer. The implications if it falls into the wrong hands are terrifying...

From Paris to London, Brussels to Algiers, Smith searches for CHambord, uncovering a web of deception on the brink of reshaping Europe and destroying the United States.

A computer is basically an electron-routing system, shoving electrical impulses around in pretty patterns, converting questions to answers, possibilities to realities. But they are limited by their inability to do more than one thing at a time.

Living cells do much the same, but utilise slower chemical systems instead of high-speed electrons. But because of that, they have the ability to process the same problems from different angles at the same time, called parallel processing.

Now imagine typing a problem into a keyboard, and receiving the answer almost instantly... because the computational engine was a mass of chemicals in a helix matrix... an organic DNA computer. With the power to break any code, crack any system, search through billions of pieces of informationfrom databases all over the world, all at the same time. This would be the vision of Sci-Fi - an artificial brain without a conscience, without a soul or sense of self.

Now imagine it gets used by the 'wrong' people in a plot to shift the entire balance of global power away from 'the big boys' and place it firmly, and permanently, in the hands of the European Nations. Would you be willing to live in a world that had such struggles going on? Who says you're not already?

Gives you something to think about really.

This story is full of politics, intrigue, underhanded power-brokering, explosive actions, fem fatales, mad scientists, terrorists, cyber-gods and secret agents. A powerful and explosive look at what we are driving towards with our desire for more computing power.

Be careful what you wish for, you might just get it.

This inspiring book allows you to choose the level of detail to colour with a varied selection of nature scenes, hearts, incredible patterns, animals and more, with large and small scale details to colour.

Features over 45 incredible illustrations to colour.