I Am Legend review 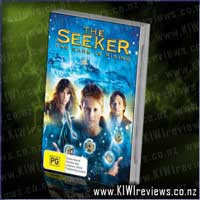 The Dark is Rising : 1 : The Seeker product reviews

Even the smallest of light... shines in the darkness.

Will Stanton learns he is the last of a group of warriors who have dedicated their lives to fighting the forces of The Dark. Travelling back and forth through time, Will discovers a series of clues which lead him into a showdown with forces of unimaginable power. With the Dark once again rising, the future of the world rests in Will's hands.

Having read the entire "Dark is Rising" sequence by Susan Cooper, and finding it one of the very best fantasy explainations for Merlin and his Army of Light from legend, I was hoping this was going to be a good cross-over... alas, earwax.

Disappointingly, this is one of those movies that never really lives up to the books... though as a stand-alone movie it does have a lot going for it. Some great acting by a few familiar faces:
•  Amelia Warner as Maggie Barnes (aka The Walker) makes quite a change in character from 'Uno Flux' in the excellent adaptation of Chung's Aeon Flux.
•  Ian McShane pulls off an 'interesting' interpretation of Merryman Lyon, aka Merlin. (Does anyone else remember the TV series 'Lovejoy'??)
•  Christopher Eccleston, having ditched his Timelord robes now climbs on horseback as the personification of The Dark, as The Rider.
There is also plenty of new talent too... with Alexander Ludwig playing an Americanised Will Stanton, aka The Seeker, last of The Old Ones to be born. (OK, he's been on screens since 2000, but never in anything 'big'). With some great special effects and a pretty good plot, it does a fair job if you ignore the plot shifts.

In a way, I am hoping they will continue and finish the series... I am particularly interested to see how they would handle conversion of "Greenwitch"... but I am also hoping that someone will try to make the screenplay a little more like the book, as in this case they butchered out quite a lot of key plot elements and omitted entire chapters. Never a good thing, and John Hodge didn't really do the best conversion I have seen, IMHO.

A pair of dumb friends named Harry and Lloyd set out on a cross country trip to return a briefcase full of money to its rightful owner, a beautiful woman named Mary Swanson. However, the duo are unaware of a bigger conspiracy involving Mary and the briefcase, and a pair of criminals involved in the conspiracy attempt to chase Harry and Lloyd down for the briefcase.