« The Tide Lords #3 - The Palace Of Impossible Dreams review 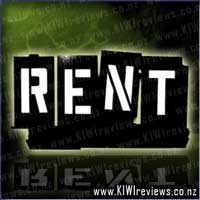 Disclosure StatementFULL DISCLOSURE: A number of units of this product have, at some time, been supplied to KIWIreviews by the company for the purposes of unbiased, independent reviews. No fee was accepted by KIWIreviews or the reviewers themselves - these are genuine, unpaid consumer reviews.
Available:
8th - 24th May 2008

This rock opera tells the story of one year in the life of a group of bohemians struggling in modern day East Village New York.

The story centres around Mark and Roger, two roommates. While a former tragedy has made Roger numb to life, Mark tries to capture it through his attempts to make a film.

In the year that follows, the group deals with love, loss, AIDS, and modern day life in one truly powerful story.

How I Met Your Mother: Season Five
Rating: 5.3

A wonderful fantastic show, filled with the most wonderful cast so dedicated to their cause. Don't miss this production because something this passionate won't be seen in Palmerston North. Top marks to all involved. Stunning !!!

There are times when even the most extraordinary of life's experiences becomes mundane, treated as 'just another day in the life of...' because it's overwhelming nature becomes too much to cope with, so we 'tone it down' in our heads and blind ourselves to it's significance, just so we can keep functioning... and occasionally we need to get a bit of a reminder in one form or another... this show was one such.

When it was first written, such topics and same-gender relationships and transgenderism, AIDS and drug addiction, homelessness and prostitution were so shocking to the 'average citizen' that a stageshow openly exposing and flaunting such themes was close to cause for a lynching... now days, with the Civil Unions Bill making same-gender marriages legal, drugs to combat a well-known and media-boring disease such as AIDS being tested daily, rehab clinics popping up in songs as casually as a puppy or a horse with no name, and homeless people and drug addicts common enough to feel comfortable approaching us on the street to ask for spare change... we have become too jaded by the shocking, numb to the pain and suffering of the downtrodden. Wel... -ding ding ding- It'll cost you $30, but here's your wake-up call!

This show is a sometime-poignant, sometimes-jarring look behind the scenes of the life of the 'artistic outside' that tends to rent those spaces we don't want, or see, much anymore. Palmerston North has some great examples, as does Wellington, Auckland, and I am sure almost every other town and city in our fair land. Places where the struggling dissatisfied youth gather to plot the rebellion that never quite happens, discuss the future that never quite arrives, and pass the time until they either grow up and sell out, or grow old and move on.

Without giving you the details of the show, I want to make a few comments on the cast and production... and keeping in mind the comments posted below by the industrious director, cast member, visual effects and set design crewman, Scott Andrew... some of my comments will be omitted, though I still didn't like the chosen volume level...

Richard Scott, who played the HIV+ has-been Rock Idol Roger, showed real talent here. With a good strong voice with plenty of range, he pulled off some great song solos and duets. Having seen him in "Back to the 80's" it was great to see him let his ample hair down and 'be' the grunge rock idol wanting to make one last mark on the world before the virus caught up with him and took him out.

The 'Tango: Maureen' duet between cinematographer and story narrator Mark, played by Phillip Gurney, and dominant lesbian Joanne, played exceptionally well by Janine Bonny (who is fondly remembered as Rumpleteazer from CATS) was brilliant. I think they really brought home how some people who you think you'll never get along with, can sometimes surprise you with how much you both share in life. Although I have to agree with the previous comment at how Phillip tended to musically-speak his lines, rather than sing them in a recognisable tune.

Edan Hunt did an excellent job of powering through the songs, giving strong melody and harmony across an impressive range of notes. She also pulled off the role of 'Mimi' exceptionally well... almost too well at times, having caused me to look away a few times to avoid blushing.

Once again the talented Richard Rewa pulls off another exceptional performance. His appearances in local productions too numerous to list (but a fair few are reviewed on this site) have made him a well-known and always-welcome face on cast lists. In fact, it was seeing his name that tipped the balance for me, taking me from 'Well, it could be interesting...' to 'Well now that's better, it's got a fair shot at good now...' - Yup, Richard is a draw-card for this reviewer... haven't yet seen anything with him in it that I didn't like.

I agree that Renee Pink didn't really hold back when it came to her performance, however I have to say the ebulent style matched the egotistical and narcissistic character of Maureen. Sometime too much to bear, this was the character and Renee did the role justice...

Liam Taylor didn't really 'shine' in "Footloose", but this time around, playing 'Angel', he outshone the floodlights. Angel turned out to be probably the most influential character, touching the lives of pretty much every other character, and created bridges where once there were divides, bringing warmth and love into the hearts of all of them, showing them another side to life. Reminding them that yes, they were all going to die, some sooner than others, but that there is only this moment, this instant of living... that the past is a lesson learnt and a mistake avoided, and the future an unknown and unknowable reflection in the mirror. Having the privilege of knowing someone with a terminal illness has shown me that those who accept their future as a mere infinite instant away from ending, truly manage to embrace life and live it, instead of plodding through it from one glum moment to the next as most of us do.

Overall, this show is a surprise waiting to spring on you... at first sounding like another B-grade low-budget production, it rips away the fancy wrapping and shows you the dark, rusty underbelly that we could all, but for the grace of god, find ourselves embedded in. It brings to the surface all the love and hate, joys and depressions, impulses and reflexes that make our lives so special, each and every moment. The song "Seasons of Love" was by far one of the biggest highlights for me, as it really gives you something to think about... but by far the most gripping song... "Without You"... I am unashamed to admit it had tears streaming down my face. We have all had to cope with overwhelming loss, with overwhelming joy, and with the paralysing fear that we have just stuffed up the best thing in our lives... and that's what this is all about... dealing with life as it is, instead of how we want it to be.

ps. One tiny little thing, no fault of the cast or crew, as the error was in the writing... 1 year is about 525,960 minutes, give or take... the original author, Jonathan Larson, didn't take into account the extra quarter-day that causes a leap-year every 4 years... but what's a mere 6 hours between friends, eh?

Becoming a big kid can be hard sometimes. For a young child it can be tough to give up a binky, learn to ride a tricycle or get a first haircut. With a story where Elmo remembers giving up his binky as the centrepiece, this release will feature stories that preschoolers can relate to, as well as giving useful suggestions to parents at the same time.

In the same way that "Elmo's Potty Time" was relevant for our audience, we hope ... more...