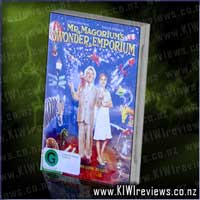 Mr Magorium owns the most amazing toy store in the world - a tantalizing toy haven in which everything inside literally comes to life. But when the boss decides to retire, the shop throws a tantrum and all it's wonders cease.

Now Mr Magorium's reluctant manager, skeptical accountant, and most loyal customer must work together to save the Emporium... by finding a little magic within themselves.

As soon as I saw the trailer for this movie, I knew I was going to go and see it. 2008 seemed to bring a resurgence in present time, fantasy style movies. This was great for me, because I love that sort of thing. Take ordinary people, add a bit of magic and mayhem and I am there with my chocolate dipped ice cream and jaffas.

This movie reminded me of the Robin Williams movie Toys and of Willy Wonka and the Chocolate Factory. Take an eccentric rich guy, give him a factory or shop of some sort and then let him and his magical stuff mix with the real world. Dustin Hoffman is fabulous as Mr Magorium, but of course he would be. He is a fantastic actor no matter what the role is. But I do enjoy him very much in his role here. He has a good comedic presence.

Natalie Portman is great in this film too. I didn't think much of the newest Star Wars films (don't shoot me, but "missa didnt likein it much"). Portman was pretty good in them though, and I have enjoyed her work since then. This role allowed her to be someone totally different, vulnerable and flawed. It was fun watching her discover herself.

There is friendship, romance, discovering who you are for several of the characters. All the while, the bit that really hooked me was the visual effects. The sparkle and fun of the magic occurring on the screen at every turn was spellbinding. It was beautiful and I took in the joy as if a child in the shop myself. I have since watched it a couple more times on DVD. It is a great way to spend an afternoon.

This is great kids movie... no bad language, no violence, nothing at all that could be considered a bad example to kids (except perhaps for lonely kids inviting strangers home to play while there are no adults around... tut-tut)... but does have a lot of good moral to pass on, like "Always believe in yourself, even when others won't" and "If you want the world to be magical, you have to make the magic happen"... ok, so perhaps this movie takes the 'metaphorical' and shows it as 'actual' but that's the key plot element, isn't it.

Dustin Hoffman pulls of yet another great performance... his facial expressions were perfect for the character, the speech patterns and slurs, he WAS Mr Magorium from the tip of his frizzy hair to the tips of his last pair of shoes.

Natalie Portman is obviously trying to find a new set of wings now that she has dropped her twin heirs, Luke and Leia, and left them to their fate in a galaxy far, far away... and I am very sorry to say she didn't pull off her best performance. She did really well throughout most of it, but dropped the ball big time in the last few minutes of the movie... she might be able to play the piano like a goddess, but she sure can't conduct and dance!

Jason Bateman also impressed me with how far he has come since I first saw him in "Little House on the Prairie" all those years ago... a mere 12 years old! I thought I would never be able to watch him again after seeing him in that decidedly pathetic series "Arrested Development", which obviously refers to the mental state of the scriptwriters. Thankfully, he does a great job of being the counting mutant... aka Accountant.

The special effects were great, to the point where my favourite character was actually a virtual... a kitset wooden dinosaur who loves to play with miniature hot air balloons. He was just so cute, like a demented skeletal puppy! My son adores this movie and has decided to make this the subject of his current round of school holiday viewing preference nagging. Always a sign of a winner.

Overall, not the best movie for adults, as it will wear thin rapidly, but the kids will probably be entranced by it for many hours of loop-play while you go out and get the household chores sorted out... or a rare bit of P&Q while the sun still makes itself known.

Score: 9.5
Product reviews for listing 5034: The Bling Ring
Directed by

For LA teenagers, Rebecca, Nicki, Sam, Chloe and Marc it's just not enough to admire their favourite celebrities and all that they have. Obsessed with fashion, fame and the glamorous life of their heroes, the group wants to get their hands on their idol's stuff. Tracking their favourite celebrities online - Paris Hilton, Lindsay Lohan and Orlando Bloom - the teens break into each of their homes and steal their designer clothes and ... more...