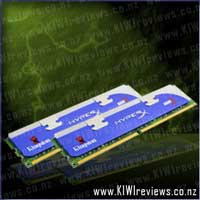 Disclosure StatementFULL DISCLOSURE: A number of units of this product have, at some time, been supplied to KIWIreviews by the company for the purposes of unbiased, independent reviews. No fee was accepted by KIWIreviews or the reviewers themselves - these are genuine, unpaid consumer reviews.
Available:
at quality hardware retailers

For the last 2 decades, Kingston has been a major player in the Memory field, and having been the first to design the SIMM layout, which is still the default design these days, they have repeatedly proven themselves as the pack leaders. With the roll-out of the 'Hyper-X' badge as the mark of top-flight excellence in 2002, we started to see the best of the best hitting our shelves at reasonable prices.

This RAM isn't the fastest, clock-wise, but it sure does have the lowest CAS latency you're going to find on stock RAM, and so we leapt at the chance to give it some of the ol' "Speed vs Timings" testing... and to do that we built a system up using an Intel DP35DPM motherboard, an Intel E8500 CPU, a juicy Seagate 1 terabyte HDD and a lot of grunty games that chew up RAM like it was gum! Now the thing we didn't realise until it was too late was that the motherboard had a voltage limit of +1.8v for RAM, forcing the RAM to revert to stock timings of 5-5-5-15... hardly anything close to the CAS-3 'holy grail' of 800MHz RAM, so we had to tear the machine down and build a second system using a borrowed board to really get to those lower latencies. Unfortunately, for legal reasons, we can't disclose what the motherboard was at this stage, but it gave us a lot more freedom for testing.

Now this RAM is a kit, with 2 x 1gb sticks giving you the 2gb required. Personally, I quite like this arrangement, as it spreads the workload between DIMMs and thus lowers the overall heat on each chip. Well, that's the theory, and I have to say that during testing the RAM, with it's nifty and stylish metallic blue heatspreader, got to a heat that still left it touchable, if a tad uncomfortable at times. We compared this to a comparable 2gb DIMM in one of our office machines, which became too hot to touch during normal usage.

First off we tried adjusting the RAM using stock settings, Latency set at 3-3-3-10, clock at 800MHz, and we got some excellent 'defaults' to work with. Our next test was to see how far we could lower the timings while retaining the 800MHz clock speed, followed by one where we ramped up the clock as far as possible without any significant 'loosening' of the timings. This is where things got a little hinkey...

First off, we couldn't effectively lower the timings at all! The RAM wasn't going to let us get away with such antics. However, with the CAS at 3, we were pretty much as low as we were going to get it, so I guess we couldn't complain too much.

After an hour of trying to ji-ji-jiggle it a bit, we gave up and admitted that the RAM was already running at lean as we could get it... time for the next test... keeping the timings 'stock' at 3, we started to ramp up the clock, but with the voltage at nearly 2.5v, slightly over the Warranty-maximum of 2.35v, we managed to squeeze out a bare 18MHz more... indicating that this RAM is already set for it's best, with little to no safe room for overclocking.

When compared to some lower-spec'd but overclockable memory, the Hyper-X doesn't make a great show, but manages to hold pace quite well... which is great when you take into account the 266MHz clock differentials... to be able to keep pace at slower clock speeds is quite a feat, and Kingston should be justifiably proud of this stock.

Now, something to consider... these results were based on an Intel-CPU-based system. A few brief tests in an AMD-based board, and this RAM proved itself even better, because of the integrated memory controller, which just adores low-latency RAM. Something to keep in mind.

Overall, a few key things to keep in mind... Firstly, this RAM seems to be pre-tweaked for best drop-&-go performance, with little room for adjustment. Running at CAS-3 means there isn't much room to drop the timings any lower, but some of the tests indicated that if you were to raise the CAS to 4, you could punch a lot more clock cycles through it and get some interesting boosts for certain gaming applications, such as recent versions of "Counter Strike" and "Half Life". If you are a die-hard hardware tweaker, this RAM will frustrate you... but for the home user who likes to play some high-end games without messing about with the hardware, these are perfectly suited for that "stuff'em-in-and-let's-go" system. The price is fairly reasonable, though you could find comparable performance at a lower price, but not at this level of quality.