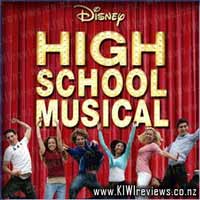 Disclosure StatementFULL DISCLOSURE: A number of units of this product have, at some time, been supplied to KIWIreviews by the company for the purposes of unbiased, independent reviews. No fee was accepted by KIWIreviews or the reviewers themselves - these are genuine, unpaid consumer reviews.
Available:
April 17th - 26th 2008

This production burst on to the cultural landscape first as a smash hit Disney Channel original movie and the soundtrack immediatley climbed to the top of the international Billboard charts.

Hmmm, rather mixed feelings about this one! Having grown up watching Musicals on a regular basis, When the movie of "High School Musical" came out, I, of course, had to at least give it a go, and found myself surprisingly enjoying it more than I'd expected (it really just hadn't looked like the sort of musical I normally enjoy). So I'd had reasonably good expectations for the Stage Show version. The one thing I really had to keep in mind though, was that most of the cast were under 20 years old, which probably explains why the show lacked some of the "polish" I was used to seeing with most of the previous productions I've attended. But considering the ages, these guys and girls did a pretty darn good job!
There were the usual opening night hiccups... sound problems, off key singing thrown in here and there, over-acting (especially with the drama teacher "Mrs Darbus", played by Michelle Mollard, but then it seems most drama teachers on stage or in movies are like this... but are the real drama teachers that, ermmmm, enthusiastic about their subject?? Never took drama in school, so I wouldn't know!), and just the odd performance here and there lacking in a bit of "oomph!". But I dare say, as with most shows, these will sort themselves out with the more shows the performers do. There wasn't anything really major that took anything away from the performance... other than maybe some of the songs being a bit repetitive (3+ times in the one show's getting a bit much!!), but this just wasn't one of my favourite stage shows.
I was also surprised to learn AFTER the show, when I finally had a chance to have a decent look through the programme, that two of my favourites from previous shows... Dean O'Flaherty and Carry Green had in fact been amongst the cast, just both as back-stage singers. This I found rather disappointing as they are both wonderful actors, and for me at least, would have added to the show if they'd been performing as well, instead of just singing off-stage. But this time, it was other voice and acting talents that got to shine I guess... such as Bradford Meurk as lead male role - Troy, who had a fantastic voice (despite the occasional off-key note), and was definitely an enthusiastic performer, putting a lot of heart into the show. Then there was Cindy Walshe as lead female role - Gabriella, who obviously had a lot of friends in the audience, as they had the annoying habit of yelling out encouragement many times during the show. Her voice was another joy to listen to, and I'll be looking forward to seeing/hearing more of her in other shows.
Jessie Feyen as the ditzy, annoying "Sharpay" was pretty good as well, but lacked strength on the singing side, and was rather over-shadowed by her "partner-in-crime/brother (on stage)" Ryan, played by Chris Martin, on the acting side.
Definitely a good show to take the kids to, although a few of the younger ones I saw there ended up drifting off towards the end (despite the sound jumping between too quiet at times to almost deafening at others), and even adults should get some joy out of this (especially if you're a kid at heart, or just love almost anything musical like me). Go in there and support the younger performing generation, but just don't make my mistake and go in with somewhat higher expectations after seeing the movies.

You are cordially invited to a wedding on Harper's Island. But what is supposed to be a lively week of celebration takes a deadly turn.

Beautiful heiress Trish Wellington (Katie Cassidy) and her betrothed Henry Dunn (Christopher Gorham) have invited their diverse group of friends and family to their nuptials on the secluded island. Although the locale is charming and romantic it has a sinister past. Seven years ago, six people ... more...