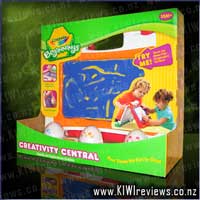 Four times the fun in one!

I really like this product! This is a great way to do finger painting without the mess! And it isn't too big that it takes up lots of room.

On the paint side you have 3 shapes that you can also have fun with. On the other side all you need is water in the pen and off you go!
My daughter loves the feel of the paint under her fingers, and she uses the shapes as well to create masterpieces! The creativity central can go into an easel position, for the finger painting and water pen drawing, and also folds down to store away.
The down side is there is only 2 colours. Blue paint with a yellow background.
On the water side I found that when my daughter went wild with the pen and in places the water hasn't dried completely, and it has left water marks on the surface. I also found the string was too short on the pen which made it difficult for my daughter to draw with.

I gave this to my 8yr old son to play with, since he has always enjoy drawing and painting. After about half an hour he was totally 'past' this one, and was back to Bionicle War, as he calls it. However, after his little 8wk old brother woke up and had finished complaining loudly at the indignities imposed by having a soiled nappy changed, 'big bro' was keen to play with 'little bro' and this was one of the first things he grabbed for. His rationale: "Well, it's clean and won't get either of us in trouble." I had to laugh.

Sure enough, little fella was too little to really get involved, but did -coo- in interest at the handprint 'big bro' helped him make, and he seemed to like the 'squishy' feel of the 'finger painting' side of the board. We grinned and -gurggled- happily at the little stamper characters that come with it, even though he doesn't yet have the dexterity or co-ordination to actually grasp them. He did seem to want to, though, with multiple swipes at them with a pudgy little fist and a few graspy-grabby motions. However, the frustration was soon too much and howling did ensue, ending the play session.

A friend with a 2 year old had a play with this for a couple of weeks, and she reported back that her daughter absolutely loved it, with many hours of quiet playtime being the main pay-off for her. So, big kudos coming from the right age bracket. However, it seems that kids of almost *any* age will get something from this, especially if they have an older or younger sibling or friend to play with and show them things.

Overall, quite a good toy. Easy to use, very clean and easy on the housework... the only let-down being that it's available in a wide range of 1 colour... blue. It would have been nice to have had a multi-coloured backing instead of just yellow... maybe a clear backing and the ability to slot in other backing colours would be an idea. Be a great use for those over-used Color Explosion pad pages that are now nothing more than flat riots of colour.

Random listing from 'Arts and Crafts'...

Let the magic begin as you soar through the skies of the wizarding world. This kit lets you build paper flyers of your favourite characters from the Harry Potter films, including Harry Potter himself, Draco Malfoy, Hedwig the Snowy Owl, the Golden Snitch, dragons, and more. With 11 beautifully illustrated magic flyers and step-by-step instructions, Harry Potter Paper Flyers is sure to be spellbinding.