The Magic Circus of Samoa review 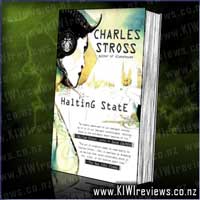 Just wonderful. Like she has nothing better to do. But online entertainment is big business, and when the bodies of real people start to show up, it's clear that this is anything but a game. For Sue, programmer Jack Reed, and forensic accountant Elaine Barnaby, the walls between the actual and the virtual are about to come crashing down. There is something very dangerous and very real going on at Hayek Associates, and those involved are playing for more than experience points.

No cheats, no extra lives, no saving throw... make a wrong call on this one and it'll be game over.

The Boy in the Striped Pyjamas
Rating: 9.5

Over recent years I have become quite taken by the writings of a cadre of new age literary sci-fi giants, including Neal Asher, Kevin J. Anderson, Gary Gibson and Iain M. Banks... and this select group appears to have a new member, Charles Stross. After discovering his first title, 'Singularity Sky', in a second hand store, I grabbed it on impulse and found myself captivated by it. Ironically, 'Halting State' arrived scant days after I finished S-Sky and mentioning to another book reviewer how much I enjoyed his work.

'Halting State' tells us a tale of the not-so-distant future... the logical extrapolation and evolution of such online-quest games as 'World of Warcraft', and such live-roll-playing games as 'KAOS', with a dash of resurrected Virtual Reality and it's cousin technology, Augmented Reality, where virtual content is overlayed on a person's visual field by a set of semi-transparent LCD glasses or a visor. In this tale, not only do companies make an absolute killing by stabilising virtual game-land economies, but huge servers to host games are obsolete, with the games themselves running on a distributed network of PDAs, cellphones and other chipped devices. Communication between devices requires a cryptographic system that boggles the mind of the average user, and is about as secure as you could imagine.

That is, until someone leads a bunch of fictional characters into a virtual bank and steals them blind. Magical items blink out of the vaults and into the culprits' stash bags, along with items of value only to other gamers, and vanish into the real world for sale... much in the way that you can 'buy' Warcraft game items on eBay nowdays. Big deal, it's a game, right? Wrong... it's the spill over of something much bigger and nastier than anyone imagines, and it's all about to come crashing down around some very real ears.

In a world where cops wander the streets and your entire life story is open to them if they pick you from the crowd, where communication is almost as seamless as telepathy, where a piece of well-written code is mightier than a solid steel sword... the mere thought of losing all communication security to a bunch of blackhats is worse than the threat of nuclear war! And when some very real, very influential people start dying, it's a sure sign there are blackhats sitting a lot closer to you than you could ever want, and you're pretty sure you'll never know who they are until the bullet is already leaving the barrel.

By far the most worthy successor to William Gibson's title as "Cyberpunk Literary King", Stross is an up and coming leader in the cyberthriller genre. With all the characters defined to the point you almost feel you can crawl into their heads, I found myself adapting to the multiple-first-person-perspective easily. Each chapter is written from the point of view of a single key character, and they naturally always refer to themselves in the first-person-singular. This can prove distracting until you get the hang of it, but after a couple of chapters I was flowing between them quite naturally... a most pleasant and passive case of multiple personality disorder as anyone could wish for.

Overall... a new winner for me, and I look forward to reading his next works with great anticipation... and I've added him to my list of authors to keep an eye out for in the second hand stacks. 'Singularity Sky' was his first... this was his 6th... I have 4 more to catch up on.

Let Zach, Hannah and R.L. Stine introduce you to the monsters from the Goosebumps movie. This survival guide will give kids everything they need to know to fight the dummies, ghosts and ghoulies if they ever come to their hometown. The book includes the monsters backstory, likes and dislikes, weaknesses, fears and much more. It is everything kids need to fight a monster invasion.