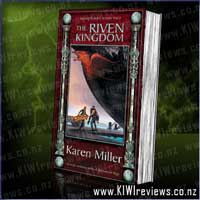 Disclosure StatementFULL DISCLOSURE: A number of units of this product have, at some time, been supplied to KIWIreviews by the company for the purposes of unbiased, independent reviews. No fee was accepted by KIWIreviews or the reviewers themselves - these are genuine, unpaid consumer reviews.
Available:
Jan '08

The second fabulous story in the Godspeaker trilogy...

The King of Ethrea is dying and his only surviving heir is the Princess Rhian, but if her enemies have their way the kingdom will not be ruled by a Queen.

Ethrea, a small island of strategic importance, is known for for its ability to keep the secrets of its business partners. Now civil war threatens as men of ambition eye the empty throne, and the other nations are getting nervous... and greedy.
If Rhian cannot secure the crown, others will descend and conquer her lands.

A toymaker and a mysterious exile from Mijak may be her only hope...

I'll be honest and say that I was a little confused when I opened up this book and started to read... because it was soooo different from what I'd read in the Empress of Mijak!!!
I admit to flicking to the end of the novel to see where it was going, and looking for characters I recognised from the first novel, as they certainly weren't apparent in the first few chapters of this one...

But I did find them, and with some reading, I figured out how the harsh world of Mijak fitted in with the peace-loving island of Ethrea... and it was a great way of intertwining the two worlds.

Princess Rhian is a wonderful new character who shows the possibility of real depth and character, and so do her strange retinue of staff who gather around her to support her as her father becomes ill and dies...
Zandakar appears in the most unusual way into Rhian's world and becomes part of her retinue too, teaching her how to fight for her right to be queen...
Rhian is not only bucking years of tradition in her bid to become Queen, there are also darker forces who don't want to see her on the throne... not as the ruler at least - a broodmare is all woman are supposed to be... right?
But does power equal right? or will a sense of destiny and determination win over top of power that has been twisted from its true roots?

And Hekat???
She is still out there, still sure she is chosen by the god of Mijak, and still not happy that her one true son is no longer with her... She is determined to get him back, and will do whatever it takes to conquer her way to wherever he has been taken to.

I can't wait for the third novel to come out, and see what happens when Rhian and Hekat meet... if their two worlds clash, it will happen in a major way!

When elderly Morey Gilbert is found lying dead in the grass by his wife, Lily, it's a tragedy, but it shouldn't have been a shock - old people die. But when she finds a bullet-hole in his skull, the blood washed away by heavy rain, sadness turns to fear. It looks like an execution... and soon a whole city is fearful as new victims are found killed with the same cold precision. All elderly. All apparently blameless.