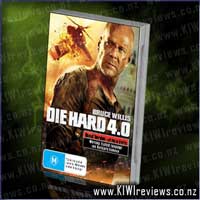 John McClane is back.

When a criminal plot is in place to take down the entire computer and technological structure that supports the economy of the United States (and the world), it's up to a decidedly "old school" hero, police detective John McClane to take down the conspiracy, aided by a young hacker.

I was apprehensive, about them reigniting the Die Hard franchise, after a successful trilogy. I didn't want to see another Star Wars; beautifully visual, but lacking in substance. But my lack of faith was poorly placed. This film was well made, taking on a new threat to the world; Cyber terrorists.

And that truly is the greatest threat to the world these days, with most forms of money transformed into plastic cards, that are linked up with digital information. While gold has, and always will have value, with advancing technology, it gets harder and harder to steal, however the advancing technology makes digital information more prevalent, and easier to gain access to.

Tackling the newest scum of the Earth, we have out good old friend, John McClane, who is getting old, but still able to kick ass. The stunts in this film are far more extravagant and gratuitous than what we have seen previously, with some incredible carnage. McClane is forced to become more creative as times go by, trapped in a city with limited ammo. With the increase in stunts and action (i.e. explosions) we see an increase in special effects, but these are kept in check, and are thus, a thrill to watch.

In this day and age, where computers are king and cyberwarriors roam the information superhighways hijacking everything from your email address to sell to spammers, through to your entire digital identity so they can steal every penny you own... something like this is all too plausible... especially if you suspend your disbelief... Any technoliterate knows that 99% of the technobabble used in the movie was utter codswallop... but better that than show the kiddies how it's REALLY done, eh!

Just like the previous three movies in the franchise, this one has a fairly self-consistent plot that tracks well, is full of action and surprises, and even carries the trademark plot elements well (such as John always having a 'personal stake' in solving the issue.) The biggest 'glitch' that is evident even to the most techno-illiterate is the fact that most of the scenes set in Washington DC were never shot there. Turns out most of them were filmed around California! OK, so probably most Kiwis wouldn't spot that... but for those of us who have been to both cities, the difference is pretty clear.

My big-hit factor in this movie is the huge swadge of familiar faces... We've got Cliff Curtis, Kiwi actor extraordinare, Kevin Smith, famed for his 'Jay and Silent Bob' movies, and for the sci-fi junkies we have Tim Russ, our favourite 'lost in space vulcan' Tuvok, and for the gas pedal nuts, we have Sung Kang, the legendary Han from 'The Fast and the Furious 3: Tokyo Drift'. As well as that, we can also add Timothy Olyphant who ranks as my all-time new fave, firstly because of his hilarious surname, but also for his leading role in 'Hitman'... probably the best PC-game-to-Movie conversion I have seen yet! ('Doom' was just pointlessly flat, and the 'Resident Evil' franchise was plain crap!)

Overall, for those who just want to sit back and watch some extreme violence, sprinkled with some witty humour and a few glib one-liners, smothered in fire and bullets... this is going to be a hit-pick for you. As the cherry on top, this version is an extended cut and in most cases I would say an improvement... with one notable exception... "You just killed a chopper with a car..." "Yeah,. I ran out of bullets" was replaced with some pointless drivel about US national car crash statistics! Shame on you! But that's just one tiny dud peanut in the otherwise-delightful sundae as far as I am concerned. Well worth a watch, and the die-hard fans (no pun) don't have this on their shelves already, they should raid the beer money for the purchase price RIGHT NOW!

The Beguiled is an atmospheric thriller that unfolds at a secluded girls boarding school in Civil War-era Virginia. When a wounded Union soldier, Corporal McBurney (Colin Farrell), is found near the school, he's taken in by its headmistress, Miss Martha (Nicole Kidman). As the young woman provide refuge and tend to his wounds, the house is taken over with sexual tension and dangerous rivalries when McBurney seduces several of the girls. Taboos are broken and events take an unexpected turn in this gripping and haunting thriller also starring Kirsten Dunst and Elle Fanning.