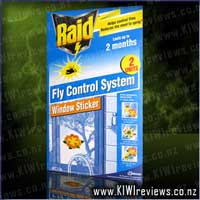 Raid Fly Control System windows stickers are an effective, odourless way to help cntrol flies in your home and don't release any insecticide.

The window stickers can be placed on windows around your home where you regularly experience flies, such as kitchens, dining rooms and bedrooms.

Flies are attracted by the colour, design and natural food attractants in the sticker and come in contact with the active ingredient which works within minutes to kill them.

Each Raid Fly Control System windows sticker is effective for an area up to 27 square metres (a small sized room) and will last up to 2 months. (The duration will vary according to the degree of fly infestation in the home.) After use, the sticker does not leave any residue on windows.

I have only purchased Raid Fly Control System - Flower Stickers once and won't be purchasing this product again. I don't have any allergies but for some reason I reacted to Raid Fly Control System - Flower Stickers once I applied them to my windows and ranch sliders around my living room area...it took a few hours before I started to feel the affects, I developed itchy eyes, a headache which made me want a nana-nap so off I went...after a few hours spent in my room I woke up feeling better as I closed the door to the hallway which blocks the bedrooms and living area off from each other, anyways after spending more time in the lounge area again my eyes started to itch and my headache came back.

I sat and thought about what may be causing this and then it clicked the only thing I had done different was apply Raid Fly Control System - Flower Stickers to the windows and ranch sliders. So I peeled Raid Fly Control System - Flower Stickers off and wrapped them up in a bag and placed into the rubbish bin and my itchy eyes and headache faded and I felt okay again. I had already thrown the packaging away so wasn't able to check to see if allergies or reactions may occur in some people.

Raid Fly Control System - Flower Stickers may work for some people but I didn't have them in my house long enough to notice a difference. I have told a few people about what happened to me when I used Raid Fly Control System - Flower Stickers and they haven't had a problem and continue to use them, and I am sure I am not that sensitive, but ah well maybe just not for everyone I guess.

I wonder if I try them again what would happen...as I am writing this review I am actually considering trying them again as I bought Raid Fly Control System - Flower Stickers a few years back and maybe things have changed......

We first saw these advertised on TV and thought that we would give it a go. After all, we hated having flies around, but wanted a nice and easy way to get rid of them.

We thought it was a good idea, and after humming and ahhing over the price we decided to buy one packet and give it a try. The first thing we discovered was that we needed to put it out of reach, otherwise my 3yo saw it as just a pretty decoration and wanted to play with it.

It was extremely easy to use, after all you just feel and stick, however, we had two problems with it. The first was that when we had condensation this leached and created a mess and secondly, when it came time to remove, half the sticker stayed behind and it required some work to clean it off.

It did an ok enough job in keeping flies away. Enough that we noticed it, but not enough to make us buy it again.

I first saw these at a friend's house. Her home is very tidy and i never saw a fly even when we seemed to have heaps. I had to try them. I liked that I could just buy them at the supermarket and didn't have to go out and get some.

It was so easy to use, just put the sticker on the window and forget about it. I'm not a flowery person so the design wasn't to my taste but there will never be a design that suits everyone.

We put the stickers up high out of the reach of our young children. I really liked that I didn't have to use fly spray as often especially with toddlers, fish and a budgie in the house.

I didn't see flies around the stickers but they seemed to be keeping the fly population down.

You can't get anything easier to use than this! Peel it off, stick it to a window in the heavy fly-raffic area, and forget it for a while! How easy is that? Once every 4-8 weeks, you peel it off and replace it with a new one... or not, if the fly traffic has fallen.

I found that when used in combination with the portable cube (though that is a misnomer... it's only got 4 sides, so it's not really even a box!) the fly problem was noticably reduced within a week.

The only thing that you may need to be aware of when it comes to using these stickers is if your house suffers from 'crying windows', otherwise known as 'a condensation problem'... the water on the stickers will leech the ingredients out, not only reducing their effective lifespan, but also leaving residue streaks down the window... not really a major cleaning issue, just a bit annoying.

Overall, surprisingly effective... and at more than just fly control... for that true multi-functional touch, these go well stuck to ranch-slider doors so the kids know when it's safe to run full-tilt at them... and when it's not. (Not a bad thing for the absent-minded adult too!) Watch out for the new 'sun' designs coming soon!

Cade oil works against the microbes that cause dandruff and let's face it, you'd rather smell of tar than have flaked skin all over the shoulders of your cool black outfit, wouldn't you? We add lavender oil to help your scalp get back into condition and to make it a bit less stinky.