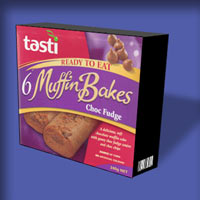 Chocolates Are Us - Ginger Brittle
Rating: 9.4

I love Muffin Bakes but had always avoided buying the choc fugdge ones. Not because I did not want too, but because I figured that my kids would just eat them all in one go and at nearly $4.00 a box at our local supermarket, I could not justify them being eaten in one go. But all (supposedly) good things must be taste tested at some point.

So I bought them (when they were on special). Like most muesli bar typre products, the boxes show exactly what you are buying, have easy to open perforated tops or are glued so you just slide a knife or finger under and along and the lid lifts, and then closes as per normal. These were no exception to the norm. The bar packaging much the same as everything else. There is not really a lot you can do with snack food packages that has not already been done.

Now I must point out, that upon first opening the bar, they are soft, chocolatey looking and definitely chocolatey smelling...they seemed liked a little bar of perfection. But they werent

I was so dissapointed. I found they tasted rather odd, I'm not sure what I expected, but I expected better than they were. They kinda had an odd texture to them, sorta I don't even know how to explain, mildly rubbery perhaps?? They are packed full of flavour but unfortunately as chocolatey as they are they taste weird to me.

I wont buy them again, even my children did not like them, but everybody has different taste buds, so even though we werre not impressed, does not mean you wont be!

I was super excited to buy these and maybe that was the problem...I think I may have expected something way better than what was actually produced in real life. While at the supermarket looking for a tasty snack bar I saw these on the shelf and I LOVE muffins so having a bar made of muffins I was in heaven!! and choc fudge how could this decision go bad??

Anyways so I get through the checkout etc and packing the car I spotted the Muffin Bakes - Choc Fudge bars in the bag and grab them out to try one on the drive home. One bite into the bar I was straight away disappointed!! It was a dense muffin mix, I was expecting a lighter and fluffier muffin mix, and where was the fudge?? I honestly wondered if I had bought a dud box of Muffin Bakes - Choc Fudge bars.

On closer inspection though there was a faint hint of a strip of the fudge gooey stuff running through the middle of the bar, but it was like it had integrated itself into the chocolate muffin mix. I finished the bar as I was always taught not to waste food and it wasn't terrible it was just disappointing.

I didn't eat another bar from the box and thought they would be eaten by my nieces when they came to stay but even they didn't like the Muffin Bakes - Choc Fudge and that is saying something.

I wouldn't recommend these to other people...sorry.

Recently while completing the weekly groceries i noticed these on the shelf (possibly they were on special haha) and memories of eating them when i was a child came flooding back so i brought a box on this fact alone. However i must admit i was quite gutted as somewhere along the lines they have definately changed the recipes.

While the bar was still quite "chocolately" it was almost slimey in texture (kinda like a muffin that has to much oil in it?), the gooey fudge centre is kind of just part of the bar, almost like its melted into the middle of the bar or something. I will note they were certainly not horrible and i continued to finish the box but i definately wont be buying again in the near future! Perhaps it was just my memory serving me wrong?!

Since then i have walked past these several times and i really want to buy them as i expect a nice fluffly, light muffin bar with yummy gooey chocolate that is in the middle but comes away as you eat it, but this is definately not what i got

Wouldnt recommend these to others sorry

I tried these recently. Though I have been a convert to the Muffin Bake bars for a while (Apple and Bran as well as the Carrot cake flavour), I hadn't tried the chocolate ones. So I decided to give them a go.

I should start by saying that I'm not a huge chocolate fan. I do enjoy it from time to time, but it's not my first choice when it comes to cakes, biscuits or muffins. However, my daughter is totally chocolate mad. So I figured that these might be a hit with her.

When I opened the first bar, the smell of chocolate did make me feel pretty hungry.The bar itself is light and spongy, but not so spongy that it would crumble in your fingers. The bar itself is light spongy with a slight chewiness. I missed the fruit filling of my favourite bars. The fudge filling was nice, but a quite sweet to me. My daughter enjoyed the chocolate flavour a lot.

I dont think I would purchase these bars for myself at all. But it would be hard to say I'd never buy these again. My kid enjoyed them and there are very few bars like these that she likes. She doesn't do rolled oats, seeds, and some dried fruits. These were definitely a hit with her.

Great lunch box treat. Great product for those times when you just want a wee naughty snack. Great price. Would like them to be bigger but dont we all?. Great for the kids lunches too. Great tasting just like a muffin with that great muffin texture but in a bar. I'd definitely buy them again. Great chocolatey taste.

As part of a taste-based experiment into alternative snackfoods for those late hours, when I don't want anything too filling, I was trying the range of these Muffin Bake bars.

I found the Choc Fudge bars a little too sweet, and a bit overwhelming. Since I am not a chocoholic (most of the time) I didn't find these too appealing. However, to choc-fiends, these would be nectar of the gods, for sure!

The texture of the muffin and filling were quite nice, with a strong choc rush to be had. Chewy enough to require some jaw action, but not too soft and fall-apart either. A very nice medium-ground was found.

The box was a little hard to see on the shelf, stacked amongst all the other very similarly-coloured boxes out there. (What is with the marketing people? They all seem to be thinking the same. Must be something in the water.)

Overall, though these would not be top of the list of snacks for me, I wouldn't ignore them either. For those times I do want a choco fix, these would rate fairly highly actually.

For those who love Garlic, this Gouda is packed with Garlic to give it a good strong flavour the chives not only make the cheese look good but round off the sharpness of the garlic so you still enjoy the taste of cheese.

A Family favourite on a grilled cheese sandwich but can be used in any way you see fit. Cheese sauces, topping, grating, cheese boards or eat it on its own.