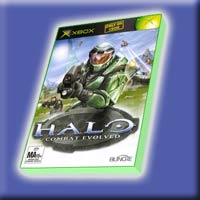 You are the last of your kind. Bred for combat, built for war, you are master of any weapon, pilot of any vehicle... and fear no enemy.

Bent on Humankind's extermination, a powerful fellowship of alien races known as the Covenant is wiping out Earth's fledgling interstellar empire. You and the other surviving defenders of a devastated colony-world make a desperate attempt to lure the enemy fleet away from Earth. Shot down and marooned on the ancient ring-world Halo, you begin a guerilla-war against the Covenant. Fight for humanity against an alien onslaught as you race to uncover the mysteries of Halo.

This is a classic game, and the main reason why the Xbox succeeded in competing with Playstation. As opposed to creating a game with realistic physics, Halo uses a "supersoldier" by the name of Master Chief, and an alien enemy, to remove any unnecessary, and not so fun aspects of first person shooters. Creating characters that can regain health and shields by evading the enemy fire, super strength and the ability to respawn, all increase the fun of the game. While those aspects make the game unrealistic, and would make it less difficult, it allows the enemy to be more dangerous, and the difficulty level can be manually altered anyway.

The story line is immersive and enthralling, and the enemies are varied in shape and difficulty to kill. With a mixture of foot travel and vehicular use, the speed of the game varies often. A wide variety of weapons also increase the fun of the game; from such weapons as the extraordinary sticky grenades and needlers, to the classic shotgun and sniper rifle.

The environments are in some places repetitive, and the navigation is not always the easiest. But the core principles are still there. The game comes with hints and helpful guides, alerting you to weapons you can swap, and telling you when you need to reload or swap weapons. Great fun for the casual or invested gamer.

Back in 2001 Microsoft released Halo for the Xbox.
It was the greatest first person shooter and in my mind probably still is.
The single player is great and some people get lost and then say it is hard, but thats what makes it great(so stick with it). If it was too easy then most people would lose interest even quicker.
Halo has the best vehicle combat I have ever seen, at first the warthog is hard to drive but if you stck with it you will love it. The marines that are with you will jump in and operate the weapon wich makes the ride a whole lot of fun.
The multiplayer is so much fun you will find it hard to stop playing (especially if you play with four people or more on system link).
This game is one of the best and you should definately give it a go! Besides if you get really bored play the first level on the seting "LEDGENDARY" and try to take out the captain or your own marines :)

i played this game until my arms hurt and my elbows cramped so that is really saying something because first-person shooters are not really my bag, baby.the strangest thing is that i didnt even know my arms were hurting until i stopped playing the game that is how far in i was. the gameplay is awesome though a little predictable in places and a h.u.d. map would be a wonderful addition (i hope they have added map feature into halo 2, oh please let it be so, oh please) because i kept getting lost in the warthog. and speaking of the warthog you would be surprised at the spaces you can squeeze that puppy through. if you are between a rock and a hard place you would be wise to wish for a warthog at slow speed because the only other alternatives are to walk (were is the 'run like hell' button by the way?) or go cruising off the edge of a very high cliff in a sturdy, damn near unbreakable warthog. roll on #2!

This game has hidden depths that surprised me greatly. It also has some annoyingly dead-ended spots that left me wondering 'So what am I supposed to do now?'

After successfully killing the aliens on the carrier ship at the start of the game, my co-player and I were left wandering around the wreckage trying to find our way to the drop capsules... so we cheated, we loaded another player's profile and jumped straight to the HALO level... where we were having a hell of a lot of fun blasting nasties (it's amazing to try and take out an alien fighter craft with just an old fashion semi-auto pistol, I tell ya!) and eventually found the 'Groundhog' assault vehicle... an all-terrain jeep with an auto-tracking assault cannon mounted on the back.

Driving the Groundhog was a lesson in how to roll a jeep on your own head, and survive to tell about it. It's a real laugh to flip it back onto it's wheels, single-handed, with just a press of the 'Change Weapon' button too. But the real challenge was the actual combat in it... with one player driving, and the other manning the cannon, the views can get get a bit disorienting in split-screen mode. Something to remember when driving the groundhog; the cannon will stay pointed in the same absolute direction no matter what direction the vehicle is pointed in. Great for strafing, checking around corners, attacking moving targets, etc. Also useful when the gunner can see a target the driver can't, all the driver needs to do is line the Groundhog up with the gun, and bingo, instant 'going the right way' indicator.

The one-on-one combat is a tad boring, with just two players running around trying to kill each other in an empty combat area. Four player mode, XBox-LIVE mode, or story-mode are by far the more playable options.

Overall, the graphics are amazing, the playability is great (if you don't mind being stuck without a map and a mission plan, or a hint as to where to go next) and the rumble effects are well implimented. A very well thought out game with plenty of challenges from the very first moment of the game. Be sure to read the on-screen instructions that appear near the top left corner, as you will rapidly find yourself trying to beat your enemy into a pulp with an empty gun unless you pick up a new one or reload yours frequently. Also very useful instructions on how to deal with doors, alien artifacts, etc.

It does not surprise me that this is one of the big 'flagship' games for the XBox, as I am sure with hours of playing under your belt, the game is a lot easier to understand.