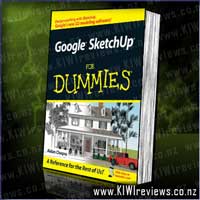 Considerably easier to use than other 3D software, Google SketchUp has found a niche in architecture, landscaping, real estate development, furniture building, and other design professions.

The fun and friendly approach assumes no previous 3D modeling experience and explains the basic concepts involved in 3D modeling
Shows readers how to build a 3D model, print it, share it, export it to another professional design package, export it to Google Earth, and create a 3D animated tour.

Helps readers harness the power of Google SketchUp so that they can populate Google Earth with 3D buildings, monuments, and other sculptures.

Tractor Ted All About Tractors
Rating: 10.0

What's the Difference: 40+ Pairs of the Seemingly Similar
Rating: 9.0

Whoohoo! At last! A 3d modelling application that is not only easy to use, but FREE! After the premature death of Adobe's 3d designer, Dimension, and the not-really-for-beginners pricetag of the ViewBuild range, it's great to see something that is as powerful as ViewBuild, but with a pricetag no-one could ever claim to be too high.

The fact that it comes from the ever-inventive Google minds, and is there to allow GoogleEarth to grow as a realistic model of our planet... well, it just fits.

This book is an excellent primer for those of us who really want to start designing 3d models, for whatever reasons, and by it's very nature, you can literally anything you want with it. Many dedicated-task packages, such as many architectural drafting packages, are locked into a particular 'mode' of design... walls, floor, ceilings are all OK, and maybe even some cabinetry... but vases, potplants, wallhangings etc are just out of their scope and you have to rely on models downloaded or imported from elsewhere. This book shows you exactly why SketchUp is far simpler in concept, but far broader in scope, by dint of it's 'edges and faces' concept.

Personally, I want something I can use to make models compatible with Adobe's Creative Suite 3 : Production bundle, since Photoshop CS3 Extended will work with many of the object formats SketchUp will output. I had originally dismissed SketchUp as an option, because I thought it was just for designing buildings to input into GoogleEarth... but after having a read of this, I was soon disabused of my incorrect assumption, and promptly downloaded SketchUp and started playing.

As the book claims, it will take a few hours of experimenting, playing, stuffing-up, and frustration until you get the hang of making something recognisable... those who have experience with the ViewBuild range will find it a lot easier to grasp, as many of the conceptual skills cross over well... which was why I found SketchUp to be a lot of fun to play with, rather then an exercise in frustration, however brief.

One of my favourite features, that I only discovered by reading this book, was the "Styles"... a great way to explore a range of presentation rendering options, from photo-realistic right through to hand-drawn... something I haven't found in any other package.

Overall, this was by far the most surprising of the ...'for Dummies' titles I have read... not only is it just as informative, easy to read and use, and detailed as all the others, but so far it is the only one to have completely changed my mind on an application.

World War II is raging across Europe, and the Axis and Allied powers are in a stalemate. Dak, Sera, and Riq can tip the scales in the Allie's favour ... if they can pull off the most daring spy mission of all time. But even if they succeed, are they playing into the SQ's hands?