ProdID: 1660 - Pirates of the Caribbean : 3 : At World's End
Directed by Gore Verbinski 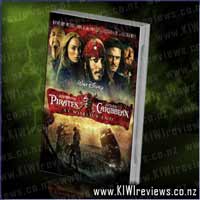 Pirates of the Caribbean : 3 : At World's End product reviews

Just when he's needed most, Captain Jack Sparrow, that witty and wily charmer of a pirate, is trapped on a sea of sand in Davy Jones' Locker. In an increasingly shaky alliance, Will Turner, Elizabeth Swann and Captain Barbossa begin a desperate quest to find and rescue him.

Captain Jack's the last of the nine Pirate Lords of the Brethren Court who must come together united in one last stand to preserve the freedom-loving pirates' way of life. From exotic Singapore, to World's End and beyond, from Shipwreck Island, to a titanic battle, this adventure is filled with over-the-edge action, irreverent humour and seafaring myth and magic. Everything has led to this twisting, turning, wild swashbuckling ride in this, the final chapter of the Pirates Of The Caribbean trilogy.

DVD Special Features:
•  Keith & The Captain: On Set With Johnny Depp And The Rock Legend
•  Bloopers Of The Caribbean
•  Deleted Scenes With Optional Commentary By Director Gore Verbinski
•  The Tale Of Many Jacks
•  Anatomy Of A Scene: The Maelstrom
•  Masters Of Design - Creating The Pirates' World
•  The World Of Chow Yun-Fat
•  Inside The Brethren Court
•  The Pirate Maestro: The Music Of Hans Zimmer
•  Hoist The Colours - The Story Behind The Song

"And what the enemy will see, they will see the flash of our cannons, and they will hear the ringing of our swords, and they will know what we can do! By the sweat of our brow and the strength of our backs and the courage in our hearts! Gentlemen, hoist the colors!" What an ending to the trilogy, here we take off not too long after the events of the previous film, with Sparrow stuck in Davy Jones locker, Elizabeth dealing with the guilt and Will thinking he needs to let Elizabeth go, so to speak. The cast from the previous movies reunite for their final battle, the aim being freedom for all pirates.

There is a fabulous scene near the end, a final great battle between the East India Trading Company, the pirates and Davy Jones and his crew, where Sparrow and Jones are fighting up in the casts and rigging and it is done wonderfully but it has the potential to make you rather dizzy, as it did for me. The special effects are really good, and as with the previous two movies, hang around till the end for a brief little clip, this one giving a nice little touch to the film, though a bit sad.

A good end to a decent trilogy.

Having absolutely loved the 2nd Pirates movie, I was majorly looking forward to At World's End... would they bring the loveably annoying Jack Sparrow back from the dead?
Patches throughout the movie caused it to be my least favourite of the 3... especially the lame and outrightly stupid segment of Sparrow in Davy Jones' Locker (although I was extremely thankful they had cut it down to a bare minimum in the DVD version, as the version played at the Cinemas just dragged and took up way too much of the movie). But overall, it was still a very enjoyable movie. The pirates' call-to-arms "Hoist The Colours" at the beginning of the movie was rather haunting, and was used several times throughout the movie, lending a sense of "loyalty" to the Pirate Bretheren that is usually lacking in a lot of pirate-type movies. As to be expected, there was plenty of betrayal on all sides, making it difficult in places to know just who was on who's side... something I felt was a little over done.
The Special Features were quite fascinating to watch... especially learning just how much of the movie is actually computer generated!! My favourite two sections of this would probably have to be "Anatomy of a Scene: The Maelstrom" (which had my 7 year son enthralled as well, and usually he gets bored with things like that!), and the section about the Map, in amongst the "Masters of Design - Creating the Pirates' World" section. So much detail went into that map!! A lot more than I had noticed with just watching the movie.
Although I'm definitely glad this is (errr...hopefully) the last of the P.O.T.C movies, and my least favourite of the 3, "At World's End" is still worth having in the collection, or at least watching if you've seen the previous 2, and getting the double disc set is worth the extra money if you're one for seeing what goes on behind the scenes!

Score: 8.0
Product reviews for listing 8234: Sorry To Bother You
Directed by Boots Riley

In an alternate present-day version of Oakland, black telemarketer Cassius Green (Lakeith Stanfield) discovers a magical key to professional success, which propels him into a macabre universe of "powercalling" that leads to material glory. But the upswing in Cassius' career raises serious red flags with his girlfriend Detroit (Tessa Thompson), a performance artist and minimum-wage striver who's secretly part of a Banksy-style activist ... more...