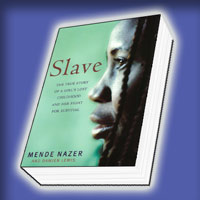 Disclosure StatementFULL DISCLOSURE: A number of units of this product have, at some time, been supplied to KIWIreviews by the company for the purposes of unbiased, independent reviews. No fee was accepted by KIWIreviews or the reviewers themselves - these are genuine, unpaid consumer reviews.
Available:
March 2004

The extraordinary story of a young Suanese girl who was kidnapped and sold into slavery, and how, in September 2000, she finally escaped to freedom.

Mende Nazer grew up in the remote Nuba Mountains of Sudan. Her happy childhood was cruelly cut short when raiders on horseback swept into her village. The Mujahidin hacked down terrified villagers, raped the women and abducted the children. Twelve-year-old Mende was one of them.

Sold to an Arab woman in Khartoum, Mende was stripped of her name and her freedom. She was kept as a domestic slave, and 'abid', without any pay or a single day off. Her food was the scraps left over from the family's plates, eaten with separate cutlery, and her bed was the floor of the garden shed, which was locked up each night. She endured this harsh and lonely existence without knowing whether her family was alive or dead, for seven long years.

In the spring of 2000, Mende was passed on by her master, like a parcel, to a relative in London. Eventually she managed to make contact with other Nuba exiles who, with British journalist and film-maker Damien Lewis, helped her escape to freedom.

Slave is a shocking first-person insight into the modern day slave trade. It is also a fascinating memoir of an African childhood and a moving testimony to a young girl's indomitable spirit in the face of adversity and shattered dreams.

Not normally one for biographies/true stories etc, I'm extremely glad I got the chance to read this one. I found "Slave" to be a thoroughly powerful book, one that, even when I had to put it down for a couple of weeks at a time for one reason or another, it still grabbed me every time I picked it up, and would only put it down when I really HAD to!!
Reading Mende's story, and realising that the "slave trade" still very much exists in today's society, was quite an eye opener.

If you're one for true stories that tug at your heart, and leave you feeling shocked and unable to put the book down til it's finished.. then this is definitely a must read!!

Keeper of the Crystals is an adventure fantasy series full of secrets and mystery. Eve and Oscar, two unlikely friends, accidentally tap into the power of crystals. They are thrust into different and dangerous worlds where unicorns, tigers, dragons and panthers communicate with people and where native communities and their way of life are under threat.What are the secrets of the crystal keeper and why does Eve have these powers?