Journeys in the Dead Season review 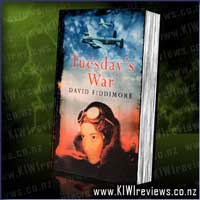 "That wasn't to be the last time we left pieces of aeroplane all over Germany, but you remember your first time. It's like your first kiss."

It is 1944 and as their battered Lancaster bomber limps home to base in thick fog, an RAF crew are horrified to find a second bomber just moments in front. It is too close for their own pilot to react, but in one skilful move their forerunner swoops out of the way and the crew's lives are saved.

Back on the runway the seven thankful young men eagerly await their saviour's return and are stunned, when the pilot climbs down from the cockpit, to find themselves face to face with female Air Transport Auxiliary pilot Grace Baker.

Grace quickly befriends the crew, introducing them to their new bomber, Tuesday's Child. Then, when rear gunner Pete the Pole absconds, the lads don't think twice about asking Grace to take his place in Tuesday as they return to Germany...

Narrated by Tuesday's radio operator, Charlie Bassett, this enthralling drama of air combat at the height of the Second World War unfolds into a gritty, heartfelt, amusing story of friendships and passions bound by danger and the relief of surviving another day.

Klutz Dress Up Your Own Paper Pups
Rating: 9.9

Having read other stories based in WWII, I was intrigued by this one...
I have two grandfathers who were in the war (although in very different capacities - one a armoured car driver, the other a teenager in Holland) and yet from them I only know the very basics of their war experiences... it's just not something that they speak of.

In reading this novel, I was given an insight into the life that the young men and women involved in the brutality of this war went through... and it made me appreciate the sacrifices that the real men and women gave for us even more.

The story of the men on Tuesday's Child was one that rang very true for me. I could picture their daily lives, not knowing if today was their swan song or just another mission, the fear and adrenaline that ran through they as they flew, they growing sense of their own mortality, the way they changed from being young carefree men to cynical and slightly mad...

The use of one of the characters as the narrator of the story was a wonderful idea - this I feel gave it much more depth and realism. Through Charlie, you were able to see the different experiences he and the crew went through, be it falling in love, protecting their own, making new friends or just being on of the lads...

The story tells of the close-knit nature of the men in these situations - how they relied on each other for everything, how they worked together as a team, not only on board Tuesday, but in their everyday lives as well.
And it also tells of a woman entering into this close group of men, and how she shares their lives, both as a friend, a lover and a fellow member of their team when she is needed...

Years ago, I watched Memphis Belle (the movie) as was amazed at the feats the men who flew the bombers where able to accomplish - both because of their bravery and the sheer devastation that was caused by them.
After having read this book, I must applaud Mr Fiddimore on his level of realism, his ability to grasp the true nature of men in this situation, and his wonderful way of making something as horrid as war into the truly readable and enjoyable book that he created.

The only thing that would have made this better for me - and this is something I always want in these kinds of books - was to know what happened to more of the men and women in the story...
Did they continue to serve after their tour of duty was over?
Did they go on to help others?

But then maybe that is a whole new story...

Practical Soil Management is a guide for farmers and horticulturists on managing soil so that it grows useful plants, sustains animals, and provides a return on financial investment in the land.

Professor Ian Cornforth is Director of the Soil, Plant and Ecological Sciences Division at Lincoln University, New Zealand. Previously, he worked for the Research Division of the New Zealand Ministry of Agriculture and Fisheries from ... more...