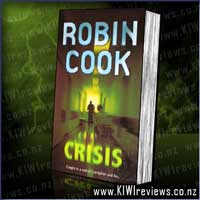 Accused of medical malpractice, Dr Craig Bowman feels shocked, angry and humiliated. He has spent gruelling years in the service of others before eventually becoming partner in an exclusive medical practice which allows him to lavish personal attention on just a small number of clients. But this idyllic situation grinds to a halt one sunny afternoon... and things are about to get much worse.

Medical examiner Dr jack Stapleton agrees to travel to Boston to offer his forensic expertise to Bowman's beleaguered defence attorney, but his casual suggestion of exhuming the corpse merely opens up a snake pit of further troubles. While the doctor's reputation and career are put on the line, Jack is on the verge of making a most unwelcome discovery - one of tremendous medical and legal significance.

However, there are some who do anything to keep him from learning the truth.

I have read some of Robin's books in the last few years, and I have to say some of them were stunning, spellbinding even. Unfortunately... this wasn't one of them.

All too believable, especially in today's medical environment prevalent in the United States, and thrilling, even suspenseful in places... but unltimately rather bland fare from a master literary creator of this calibre.

I can't say it's a bad book... it's not, by any means... but it just lacked... something. Call it Factor X, je ne se qua, Mystery Ingredient Y, whatever... there was something lacking from the story that had me thinking this book would have been better targetted as a late-teen fiction tale, rather than a thriller for older readers.

Overall... though a good tale in and of itself, it's not his best by any means. I would suggest readers aged 16-20 would find this a good weekend read.

Sometimes a big brain means big trouble! When the ground begins to shake and volcanoes spew flames, Arg's tribe is in danger! Find out how Arg and his friend Shlok save the day - in a very messy way.

Step back in time and join Arg and Krrk-Krrk in the second side-splitting, disgustingly funny Dinosaur Trouble adventure. Grossness abounds - not for the faint-hearted, but kids will love it!