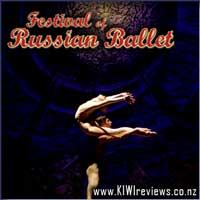 The name of the company is recognition of the grand masters of Russian Classical Ballet School and the Imperial Family who made such a great contribution to the development of Russian culture including the creation of the Bolshoi and Marinsky Theatres.

This was just an absolutely STUNNING performance!!! The last time I went to a ballet was Coppelia, when I was about 10 years old, but I have wanted to go to another one ever since.
My young ballet-dancing friend and I settled into our seats, and I sat there waiting for it to begin... wondering whether my rather vague memories of enjoying my one and only experience of ballet were still correct, and whether I would feel the same this time round. Act 1 started, with stunning costumes, lovely pieces of music, and wonderful dancing in abundance. There was the odd stumble, loss of balance, missed cue etc, but the troupe was extremely professional and it was barely obvious as they just carried on going. Mind you, it's not at all surprising there was the occasional fault or two, considering their rather grueling schedule, that was shown on the last page of the programme. How on earth do these guys manage to stay on their feet, nevermind DANCE on them after all this?? Talk about discipline!!
Snippets of ballets like "Giselle", "Carmen", "Don Quixote" etc made up the first act, with some of them being haunting, some being a vivid display of colour, and others having a good dose of humour. My favourites would definitely have been the haunting "Dying Swan", performed by the beautiful Anzhela Tsukanova who brought out the Swan's grace and elegance with ease; "Gopak", danced by the cheeky Roman Arkhipov with elegant power that made me wish that section was longer; "Ne Me Quittes Pas"... another haunting piece, this time performed by Ekaterina Tikanova, wearing a gorgeous red dress, and lit with nothing but a lovely golden glow; and most definitely the "Can Can Surprise", which was positively delightful with a large dose of humour... the Choreographer, Vitautas Taranda was a riot in his role of "Lady in Red', watching him stumble about on his toes, dancing with two guys who were lucky if they were half his size (Kirill Radev and Roman Arkhipov), swirling them around by the head (OUCH), etc. The only problem I had with this section, was simply that, with my lack of experience with the ballet world, I had a hard time following the stories when there was no commentary. Guess I'll just have to go to more ballets to get used to that side of it.. lol!
Next came "Carmina Burana", which was listed as Act 3 in the programme, but which we were told at the start of the ballet, would be performed as Act 2, for reasons unknown. Again, another stunning piece of work, although my companion and I both agreed this Act did drag on a little long, and was a tad bland in comparison to the other Acts, but it was still thoroughly enjoyable.
Last came the explosive "Bolero"... powerful, riveting, intense. It built up nicely and was the perfect finish to the entire performance. I have no idea why they switched Act 2 and 3 around, but for whatever reasons, it was a wise decision!!!
I absolutely LOVED the Festival of Russian Ballet, and would dearly love to go and see it again. I can't wait til next year when they bring "The Nutcracker", and will definitely be rushing to beat the line up for the tickets when they go on sale!!

When most people think of the Russians, they think of communism, Vodka and furry hats. It is a shame that the Russian Ballet is not so well-known outside real officionados of ballet. To anyone who has no idea of the standards set by the Russian ballet, it is like comparing a Skoda car with a Rolls Royce. The Russians are truly the Rolls Royce of ballet. Forget the Kiwis, even the English and French pale beside the standards set by the Russians. Needless to say, I am not only a fan of the ballet - but truly a fan of the Russian ballet troupes - Boishoi, Kirov and the like.

Now, onto the performance itself. The first act was small pieces from other ballets. Despite the primadonna-ish performances from the Russians to show of their high standard, I actually felt it more to entertain the kiwis with a short attention span and ease them into the longer pieces of acts two and three. Every short piece was a mini epic in itself. Truly magical stuff - and well worth the disjointedness. The costumes and the scenery were simply stunning too.

Act Two - Ravel's Bolero was an odd choice of music - one I find a little monotonous, dull and repetitive; however, the choreography and the sheer brilliance of the dancers made this piece stand-out from the the mundane into a work of virtuosity from every single performer and wholly memorable experience for the audience.

Act Three - Carmina Burana was a truly inspired performance. The work by Carl Orff is again, and unusual choice to choreograph to a ballet - but the Russians pulled it off with aplomb. The performers carried the story of the music in a manner befitting the music and told the story in such a way that anyone unfamiliar with the music would know the story. Naturally, with Carmina Burana being a cyclical piece of work (the start and the end are the same) the 'O fortuna' seem to resonate with the same power and passion as when it opened the work.

I would guess that all fans of the ballet could not fail to be inspired by the Russians coming to town. It also seemed to me that many people (dragged along by their partners, perhaps) were also pulled along with the emotion of the performance and many seemed to enjoy it.

The only slight adverse comment I could make is the programmes - where were they? The promoter sold out very quickly and I heard a number of people complaining to theatre staff about a lack of programmes which was really nothing to do with the theatre staff. I do appreciate that it is hard for the promoter to judge just how many are likely to sell - and on this occasion, underestimated the numbers needed.

So yes - I really do look forward to getting tickets next year.

The West family, their friends and associates laughed, cried, loved, drank and swore their way into the hearts of audiences at home and around the world.