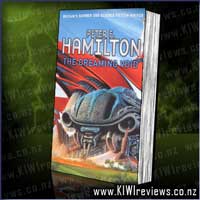 AD 3580. The Intersolar Commonwealth has spread through the galaxy to over a thousand star systems. It is a culture of rich diversity with a place for everyone. A powerful navy protects it from any hostile species that may lurk among the stars. For Commonwealth citizens, even death has been overcome.

At the centre of the galaxy is the Void, a strange, artificial universe created by aliens billions of years ago, shrouded by an event horizon more deadly than any natural black hole. in order to function, it is gradually consuming the mass of the galaxy. Watched over by it's ancient enemies, the Raiel, the Void's expansion is barely contained.

Ingio dreams of the sweet life within the Void and shares his visions with billions of avid believers. When he mysteriously disappears, Inigo's followers decide to embark on a pilgrimage into the Void to live the life of their messiah's dreams - a pilgrimage which the Raiel claim will trigger a catastrophic expansion of the Void.

Aaron is a man whose only memory is his own name. He doesn't know who he used to be or what he is. All he does know is that his job is to find the missing messiah and stop the pilgrimage. he's not sure how to do that, but whoever he works for has provided some pretty formidable weaponry which ought to help.

meanwhile, inside the Void, a youth called Edeard is coming to terms with his unusually strong telepathic powers. A junior constable in Makkathran, he starts to challenge the corruption and decay that have poisoned the city. he is determined that his fellow citizens should know hope again.

What Edeard doesn't realise is just how far his message of hope is reaching...

It should be illegal for authors this talented to write series-titles... it's just not fair having reached a critical point in the storyline, only to reach the last page and know it'll be a year or so until you can scratch that itch again! It's worse than Christmas! You can at least FAKE a Christmas party any time of the year...

Following on 1500 years after The Commonwealth Saga, with the whole Starflyer War etc... humanity has really gotten off it's butt! With two distinct new species of humanity, a new post-physical evolutionary branch being started with ANA, and a number of 'allied' alien species in the fold, things have become quite tough for humans... With the beginnings of rebellion once again showing signs of rising, it's time for a few of the 'old cadre' to reincarnate into physical form and get involved in a far more direct manner. This entails some seriously nifty new technology, the likes of which rival that used in tales by another favoured author of mine, Neal Asher.

I thought it a shame that Peter left so many of the other prime characters out of this story... Ozzie has apparently gone walkabouts down the Silfen paths, after disassembling their gift to him and using it to develop the gaiafield, Nigel Sheldon has just gone... no mention of his whereabouts, the SI gets mentioned, in passing, once... yet it was the pre-eminent mentality in the first 2 books (after Morning Light Mountain, of course)... and basically, this is like reading a whole new story, with deja vu playing hobb in your peripheral vision...

Now, this is book 1 of 3, so I am not going to really make any judgement on the storyline, since it's far from complete... but I will say it is a stunning opening gambit... this book is 650 pages in trade paperback format, which means it's big... really big... and yet I plowed through it in record time, I was so engrossed... I loved the way that Peter evolved new technologies from that brought about in the Commonwealth Saga books, and I apreciate that he has done some homework into the plausability of some of it, as evidenced by the details he mentions in places, but most of all I love the way it is integrated into the story in such a way as to feel almost commonplace... it's there, but it's just like a couch or a table... only characters who aren't familiar with it actually comment on it much at all, and that helped to draw me in...

Overall, an excellent start... Peter has once again pushed the benchmark up another notch... and I am hoping he's going to do so again with book 2...

Ruby loves playing with Toby and can't wait to take him for proper walks - they'll have such fun!

But on an outing to the woods, Toby's curious nature gets the better of him and he runs off in search of adventure. Soon the puppy is lost in the woods, frightened and all alone. Will he ever be reunited with his beloved best friend Ruby?