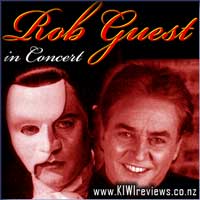 The Phantom Returns... with all your favourite songs, and much more...

Any Given Thursday
Rating: 9.8

Once again I found myself entering the delightful Regent Theatre in Palmerston North, to finally see live someone I have heard about for many years. I had been forewarned that this show is less a concert and more like a Las Vegas style stage cabaret act, where Rob not only sings, but mixes it up with anecdotes, stories, audience interaction, etc... and they were bang on... that is exactly what transpired.

As the lights went down, the talented and beautiful Kellie Dickerson walked out on stage wearing a voluminous green dress that was, I think, perhaps a little too much... However, despite a little side-scene later in the show with Rob commenting on how '...Australia had no green fabric left now...', the dress was soon forgotten as her nimble fingers brought forth great music from the piano on stage. She opened with 'Maria' from West Side Story, and Rob's voice came singing from out of the darkness... followed shortly by his body walking in from the wings to applause from us all.

A quick greeting after the song, and straight into 'Any Dream Will Do' from the hit show 'Joseph and the Technicolour Dreamcoat'... which lead oh-so-nicely into another funny anecdote about Rob's crew playing a delightful practical joke on him when he played Joseph in the now-extinct Palmerston North operahouse, where he was presented with his dreamcoat by the cast in the closing scenes of the show. Of course, as anyone who has seen the show knows, at that point Joseph is wearing not much beyond a smile and a pair of shorts... and his delightful crew has coated the inside of his dreamcoat with cold, slimy, unpleasant vaseline... the mere thought of which brought much merriment to the audience this night.

As the show progressed, Rob made a few song dedications, the first of which was 'Midnight' from the hit show 'Cats', a song which was sung in the local production by the delightfully talented Carrie Green... who I think did a much better job of it. In all fairness to Rob, as skilled as he is, he's no lead female vocalist.

This song he dedicated to a goof friend of his, Elaine Paige, who I first heard in the hit musical 'Chess'.

As much to impress as entertain, Rob had done a bit of homework on the local scene, and had written a little poem-ditty with current local and national events included, including our impending election of council, the news that PN airport was about to lose the Freedom Air charter flights to Aussy, and some sporting news regarding the Turbos... this endeared him to the audience to quite a degree, with some overheard comments including "Well, nice of him to remember his roots..." and "Wow, he really does his best to be a entertainer as well as performer, doesn't he...", senitments to which I agreed.

As an added surprise, when Rob got back to singing, we heard a powerful female vocalist from off-stage start up in the title song from 'The Beauty and the Beast'... which turned out to be the lovely and talented Ally Harper, who was to make a few more appearances throughout the show. She took a quick break while Rob sang 'On My Own', from Les Miserables... this was another song our local songbird Carrie Green performed beautifully as Eponine... and again I think it is a song best sung by a female vocalist. Despite that, Rob pulled off an inspiring rendition for a male vocalist. After that we had the pleasure of Ally's solo performance of 'I Dream a Dream', also from Les Mis... a theme which Rob continued with 'Bring Him Home', sung by the character of Jean Valjean. This song showed us Rob power and vocal range, from quiet falsetto to empowered baritone... and which led us quickly into a 15-minute intermission.

As the lights dimmed, signalling the end of the break, we were treated to 'New York New York' and some more delightful stories of Rob's life on the musical road, including a heartfelt tribute rendition of 'Mr Bojangles' to the memory of his personal friend Sammy Davis Jr. Though this song was originally written by Jerry Jeff "Scamp" Walker back in 1968, Sammy released what is arguably the most famous interpretation of it since it was first made a hit back in 1970 by The Nitty Gritty Dirt Band. No-one today can hear this song without thinking of Sammy, so it was a fitting tribute. Rob continued on with a medley of songs from shows such as 'Oliver' and 'Phantom of the Opera', and also some unrelated songs to mix up the tempo a bit, such as 'Swanny', and we were treated to more Ally Harper, who sang a duet with him of 'All I Ask of You', and later a solo rendition of 'Don't Cry for Me, Argentina' from 'Evita'.

Rob's determination to get the audience into the show was evident when he asked that the house lights be raised so he could see the audience, then chose one member to stand and 'conduct' the 'hands in the air, swaying to the music' for the song 'Carolina'... which had us all in giggles. The show wound up with 'Love Changes Everything', after which he left the stage... however since the lovely Kellie didn't stand and depart also, it was clear we were going to get an encore, and sure enough after a minute of our constant applause, he returned to give us the final song of the night, which was a powerful rendition of "I Did It My Way". This capped off a wonderful, entertaining evening with some truely talented performers. Well worth the ticket price, so if you see he is coming to your town, and you love that era of music, get to the show!