Home > Categories > Movies > Fantasy > The Lord of the Rings : 2 : The Two Towers review

The Lord of the Rings : 3 : Return of the King review 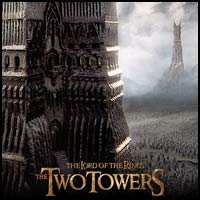 Disclosure StatementFULL DISCLOSURE: A number of units of this product have, at some time, been supplied to KIWIreviews by the company for the purposes of unbiased, independent reviews. No fee was accepted by KIWIreviews or the reviewers themselves - these are genuine, unpaid consumer reviews.
Available:
In a variety of formats

The Lord of the Rings : 2 : The Two Towers product reviews

The Fellowship has been broken.

Boromir (Sean Bean) is dead, Frodo Baggins (Elijah Wood) and Samwise Gamgee (Sean Astin) have gone to Mordor alone to destroy the One Ring, Merry (Dominic Monaghan) and Pippin (Billy Boyd) have been captured by the Uruk-hai, and Aragorn (Viggo Mortensen), Legolas (Orlando Bloom), and Gimli (John Rhys-Davies) have made friends of the Rohan, a race of humans that are in the path of the upcoming war, led by its aging king, Theoden (Bernard Hill).

The two Towers between Mordor and Isengard, Barad-dur and Orthanc, have united in their lust for destruction. The corrupt wizard Saruman (Christopher Lee), under the power of the Dark Lord Sauron, and his slimy assistant, Grima Wormtongue (Brad Dourif), have created a grand Uruk-hai army bent on the destruction of Man and Middle-earth.

The rebellion against Sauron is building up and will be led by Gandalf the White (Sir Ian McKellen), who was thought to be dead after the Balrog captured him.

One of the Ring's original bearers, the creature Gollum (Andy Serkis), has tracked Frodo and Sam down in search of his 'precious', but is captured by the Hobbits and used as a way to lead them to Mt. Doom.

The War of the Ring has now begun...

This is the movie where everything is really split up and you are left following all the different story lines that are going on. from Frodo and Sam, Merry and Pippin, Aragorn, Legolas and Gimli and so on. The really good thing though, is that they don't end up feeling disjointed, as some movies end up feeling, everything is timed so well that it just goes with the flow and everything feels like it is going along as it should be. Everything in this follows on from the first movie but all is necessary to set things up for the final installment.

Once again the cast and crew far exceed my expectations and really out do themselves, the scenery is stunning and there were moments when it literally took my breath away and there wasn't a moment when anything felt like it didn't fit in, the special effects in this are amazing. The plot was well done, though I have to admit that after a few viewings Elijah Wood gets on my nerves a bit, but I have to put it into perspective that his character, Frodo, has a lot of weight on his shoulders ,the fate of Middle Earth literally rests on his shoulders.

Another great movie in an awesome trilogy.

This was the one I had been waiting for. This is the one FULL of Orcs... and wildmen... and Rohan... so I got to sit there in smug satisfaction as I saw myself running around getting cut to pieces, pulling over trees, falling off rock ledges, running around with flaming torches... HEAPS of fun!

Though not much of a fantasy buff until recently, this movie (and the other 2 as well) drew me for so many reasons... too numerous to list really.

The performances from the main cast, the consumate skill of Peter Jackson to direct all three at once, the awesome work of the SPFX crews (Weta - World class work folks!), it all combined with a great plotline to form an epic, a classic epic at that!

And it did wonders for the position of New Zealand on the world movie scene. Willow was good, The Frighteners (another Jackson classic) was good, but the LotR trilogy were GREAT... they really put us on the map!

Overall... my favourite of the three.

How Far Would You Go To Save The Family Business?

Inspired by the true story of a traditional English men's footwear factory in Northamptonshire which turned to production of kinky boots for transvestites in order to save the ailing family business and safeguard the jobs of the local community. This delightful cast, brings back to the screen an excellent, entertaining, funny, and heart felt movie likened to The Full Monty phenomenon!