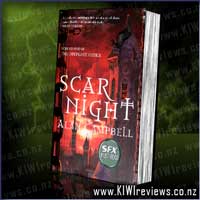 For a hundred generations the city of Deepgate has hung suspended by chains over a seemingly bottomless abyss. In the darkness below is said to reside the dread god Ulcis with his army of ghosts. Outside the city extends the barren wastes of Deadsands, inhabited by enemy tribesmen, and safe access is guaranteed only by airship.

At the hub of the city rises the Temple, in one of whose many crumbling spires resides a youthful angel, Dill, the last of his line. Descendant of heroic battle-archons, though barely able to weild the great sword he has inherited, he lives a sheltered existence under the watchful eye of Presbyter Sypes, ruler of the Temple.

Yet Dill has a destiny about to unfold - one that takes him down into the terrifying depths of the pit in a desperate quest to save the teeming city from total annihalation.

This book started out as a bit of a struggle for me, initially that little bit hard to read. It wound up worth it in the end, but if you give up easily this one could be tricky. I found the characters to be quite interesting - especially since you have the opportunity to learn what's going on alongside Dill (the main character). Once you got past the start dragging it definitely drew you in, wondering what would happen next. You also get to learn a little what might be truth or lie - provided you were paying attention. I would definitely recommend this book to any fantasy/ thriller fans as it combines the both quite well without being yet another 'thriller' story.

Disillusioned, now derided as the 'Butcher of Bellic', war hero Martil leaves his beloved homeland in search of peace. Set upon by bandits, he is tricked into taking a small child, Karia, to her uncle. But the village has been gutted of its people, except for one ex-bandit who has the Dragon Sword - a magical relic belonging to the rulers of Norstalos.

Now Martil and Karia find themselves swept up in the struggle for a country. ... more...