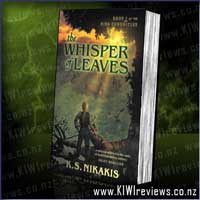 Can healing defeat the sword?

In seasons long past, twin gold-eyed princes sundered a kingdom. Rejecting his twin brother's warrior ways, Kasheron established a community deep in the southern forests. Forgotten by the outside world and protected by the trackless trees of Allogrenia, Kasheron's Tremen community has flourished, with his legacy of peace and healing upheld generations on.

But now the forest has been breached by hostile intruders...

Fighting and bloodshed follow, testing even the skills of Kira, the greatest of all Tremen Healers. As well as sharing Kasherson's gift for healing, Kira has inherited his golden eyes and inspirational qualities - she, too, is seen as a leader amongst her people.

As the attacks upon the Tremen become more violent, Kira is faced with a terrible dilemma. Should she stay and risk the annihilation of her community, or set out on a perilous journey north to seek aid from their long-lost warrior kin?

100 Most Awesome Things on the Planet: Prepare to be Amazed!
Rating: 9.5

Morgan, the Moreporks, and The Moon.
Rating: 9.0

For Karen Nikakis' first step into the fantasy genre, she's done a wonderful job. From the first page, the reader's drawn gently into the land of Allogrenia, where the peaceful Tremen Healers reside, and introduced to the strong-willed, yet gentle natured Kira, along with her clan-kin and friends. Then we meet the other side of the story - the Shargh, with Chief Erboran at its head, and his younger blood-thirsty brother, Arkendrin, who is forever seeking to take Erboran's place.
Held captive from the first chapter, I found it difficult to put the book down, and was always eager to resume reading at any and EVERY chance I got.
Nikakis was descriptive but without being so heavy on the details that I was wanting to skip parts, like I find myself doing in some books, and gave snippets of history about both tribes throughout the book without drowning you in it. Her characters are very easy to like - even the supposed 'bad guys' - the Shargh who have their own worries and struggles that I found myself as equally caught up in, and if it wasn't for Arkendrin stirring up a hornet's nest with his greed and hunger for power, (oh the joys of being second born, lol!!), there wouldn't even really be a bad guy. Kira's strength and devotion to her Healing are clearly evident throughout the book, as she fights both her father and the damage the Shargh blades cause, with her abilities and courage severely tested along the way, and none of this lessened when she's later made Leader of the Tremen.
The last chapter certainly leaves you hanging, wondering just what the next book will bring, and if you're a fantasy fan, then I'd definitely recommend giving The Whisper of Leaves a try, and watch out for any of Nikakis' books in the future. This is one author who I can see becoming quite popular.
All I can say now is I really hope Karen is writing fast, as I am seriously itching to dive into the second book when it comes out!!

It is 2058, New York City. In a world where technology can reveal the darkest of secrets, there's only one place to hide a crime of passion-in the heart.

Even in the mid-twenty-first century, during a time when genetic testing usually weeds out any violent hereditary traits before they can take over, murder still happens. The first victim is found lying on a sidewalk in the rain. The second is murdered in her own apartment ... more...