« Against a Dark Background review 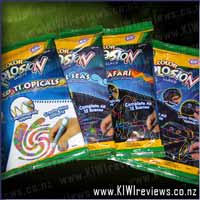 It may look like ordinary paper, but Color Explosion lets you make wild multicolored designs with just one marker! The special Color Explosion marker makes amazing swirls and patterns of color magically appear as you draw.

NOTE: Some sets may retail at different prices.

I have bought a few of these packs since they first come out. My family live on the west coast and in Christchurch and so it is important I have small things in the car that can easily entertain my three children when we travel. Especially my youngest who gets bored and sick of the trip very quickly, but unlike her brothers refuses to give in and sleep lol

The color explosion packs, turn your normal every day drawings in to amazing full of color drawings, without a great deal of effort on your part really. The kits come with about 20 pages to draw on, markers and stencil for those who do not want to draw free-hand. So with so much in the pack you know they will at least last a little while.

I have noted in some of the packs we have had that the markers do not always seem to last that long, which is a bit of a bummer, but the colors are really pretty and bright. You can even buy metallic kits which my daughter thinks is awesome. The other bonus is that they do not take up a whole lot of room in the car, so no squabbling about have no leg room or no where to sit due to to many toys lol

I have bought a few of these since they came out and all in all they are great sets for young children. They are really easy to use and provide children with a way of unleashing creativity and occupying their time. When my own daughter was younger I would often get these as a school holiday or rainy day activity to escape the "i'm so bored, what can I do" question. I have also bought them as presents for other children as they are an affordable present for friend's birthday parties.

My favourite one would have to be the black paper, with the colour that comes through when you use the special pens. Because they are made out of cardboard they are really good to put in a frame when the child has finished creating their masterpiece and the colour on black is a really effective and eye catching piece.

The one thing that got me on these was when my daughter knocked over a glass of water onto a colour explosion book and much to my disgust the black ink all run off all over my creme coloured carpet. It was really hard to get black ink out of the carpet and I now make sure if she uses these she sits up at the table to do so, so as not to risk my carpet being destroyed again.

I have brought these packs several times as presents for my nieces who are right into anything arty/crafty... My oldest niece (7) really loved these and was ripping into the packet to try them out before even opening the rest of her present! She spent at least a good hour engaged in drawing, trying out the stencils and different colours on each page etc. Her mum told me she continued to revisit this over the next few days/weeks and still to this day (months and months later) has some of the art she created with them on her bedroom wall. My younger niece found it a little hard to press the markers as hard as she needed to, but i figured the challenge was good for her! Will definitely be buying again in the future :)

I liked the way the colours just appeared as you draw your design. I alos liked the colours and the patterns that come out of the black pages. I would like to see pages coloured blue because blue is my favourite colour.
I felt like doing them while in the car on long drives because then I have more time and I get to see lots of things like plants that I can draw.

One of the few things to keep my daughter entertained for any length of time is art. Drawing, painting, drawing and painting, anything that involves glue and the possibility of making mess or art (I can never tell the difference at times) can keep this busy little brain occupied for hours.

Somehow I didn't think this Colour Explosions would really cut it - how wrong I was. We first got this pack out on the aeroplane to the UK and left her to it. Naturally there was an abundance of art produced at the end of 24 hours of travelling.

What did surprise me was my parent's reaction to the art and the Colour Explosions pack - in fact, my dad couldn't wait to have a go. It wasn't long after that my mother and my sister had a go - after being 'shown' how to by my daughter.

A simple idea, and cleverly executed and something that can occupy kids for hours for a low cost investment - and that investment is well worth it to keep your little angels quiet for a few hours.

This is a new take on the old use a scraper on a black page to draw a multi-coloured picture. In this the pictures are all pre-drawn, but that still doesn't take away from the fun of tracing the lines to reveal a multi-coloured scene of wonderous proportions.

However it does require a steady hand (which I definitely do not possess.

) but my two boys gave it a great shot and have done some really wonderful artwork with this, and with twenty pages in each pack you really can have a lot of fun with this.

On a recent long trip north, I ended up taking my young son with me. It was going to be an exercise in frustration for me, and boredom for him... until about half an hour into the 7 hour trip, he opened his newly-assembled travel fun bag, and found some of these inside... what a whoop of joy he let out!

He's always enjoyed drawing, but this kit added a whole new dimension to it for him. His silence for the next 2 hours had me wondering if he had actually fallen asleep, but no, happily scribbling away drawing pictures of strange and wonderful things.

I had a bit of a play with them later too, and found them to be quite nifty. I was quite impressed by the stencil sheet, but I found the pens to be slightly ineffective unless drawn over the lines a couple of times. A single pass would usually result in the line producing a very faded effect, as the solvent in the pen dissolved only part of the covering black or white layer. This was solved by recapping the pen and giving it a bit of a shake around.

Overall, not quite what I was expecting, but certainly very entertaining, both for my son during the drive, and me afterwards. I loved the diversity of kits, from those with the unmarked black and white pages, which are perfect for the young with an artistic leaning, to those that have designs already marked on them, requiring only that the child trace the lines, which are great for really young kids trying to improve their hand-eye co-ordination.

Random listing from 'Arts and Crafts'...

Pick Them, Stack Them, Pop it in!!