Home > Categories > Music > CDs > The Boy With No Name review

ProdID: 1427 - The Boy With No Name
Performed by Travis 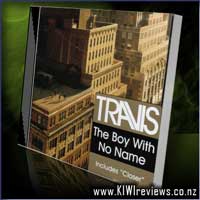 The Boy With No Name product reviews

Whatever We Wanna
Rating: 8.0

I admit that I am not a huge fan of Travis... I prefer music with a little less 'cruise' and a bit more 'move'... even if I do dance like a jellyfish having a nervous fit.

However I would have to say there was a lot of promise on this disc... One of the songs that really stood out for me was "3 Times and You Lose"... it has a very mellow feel, even when the bass and drums kick in... this is good 'sit by the BBQ in summer' music... set on a medium volume, it's nice to chill out to, but also safe to have a conversation over the top of, since it doesn't have any really loud or quiet patches.

Probably my favourite would have to be "Selfish Jean"... partly because I love the pun on the name. Yeah, OK, so it's science geek humour, but so what? The song has a great rhythm, and most importantly, like most of Travis' music, it actually has more than 3 lines screamed over and over. I think that is one thing that really lifts travis out from the current pack of non-Rap artists. However, the most famous song would be "Closer"... it even has a video on YouTube featuring Ben Stiller. It's a great song... and the video is quite dinky. I love the way they make it publically available via the internet.

Overall... there are 12 tracks on this album, and I would say that at least half of them should appeal to anyone who has liked any of his previous stuff. There are some highlights, and a few that I thought weren't up to his usual standards, but then, my personal policy is that if more than half the tracks on an album are worth listening to, it's worth buying, and this album is worth buying for sure.