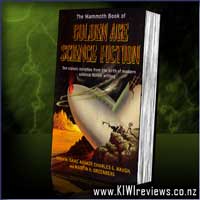 The Golden Age of Science Fiction, from the early 1940s through the 1950s, saw an explosion of talent in SF writing, including authors such as Isaac Asimov, Robert A. Heinlein and Theodore Sturgeon.

Their writing helped science fiction gain wide public attention, and left a lasting impression upon society. The same writers formed the mould for the next three decades of science fiction and much of their writing remains as fresh today as it was then.

The Encyclopedia of Immaturity Volume 2
Rating: 9.8

Now this is what I am talking about! This is the stuff that first got me hooked, that awoke my imagination and love of sci-fi. OK, so I wasn't even a twinkle in my grandparents' eyes back when these were written, but by the late 70's when I was looking for something a little 'lighter' than Dad's refernce library of dictionaries, enginerring digests and medical texts, this was the stuff that drew me. My first experience with Sci Fi was, in fact, one of Asimov's early robot stories.

Speaking of Asimov... probably one of the top-3 stories in this book for me was his "The Big and the Little", a great tale set in the universe of Hari Seldon's Psychohistory, the universe of his ground-breaking and epic "Foundation" tales. I always enjoy those tales... the intrigue, the turnabouts, backstabbing and politcal juggling of loyalties... gives me such an easy way to understand what goes on in today political system, without having to deal with the primadonna personalities... I can see what's happening, and how, regardless of the who factor.

My next favourite tale from this book would have to be Fredric Brown's "Daymare" - what a head-trip! How do you cope with a man who dies 3 times, and everyone sees him dead in a different way and is utterly convinced of their own interpretation? How does a law enforcer deal with the idea that maybe, just maybe, he's crazy? When logic fails, when the sane act crazy but don't think so, when those you trust seem to turn on you for no reason... then maybe the only answer is on the far side of insanity, and the other side of the law...

By far my favourite story is the first in the book, "Time Wants a Skeleton" by Ross Rocklynne. I adorwe time-travel tales, and especially if there are paradoxes involved. Gotta love a "Did I just kill my grandad?" type paradox. This tale really did have it all, for me. The science, the human factor, the mystery... oh I love this stuff. In fact, I re-read this one tale three times, just to make sure I hadn't missed any key details, because even though I can usually predict the outcome of a novella-length story by the half-way mark, this one had me stumped right to the end. Excellent stuff, really top-notch.

Overall, if you like modern sci-fi, and are at all curious as to how it came about, what seed it grew from and evolved from, then this is definitely a book you should grab and add to your collection. For the price, it's a bargain you won't see often, so get it while you can. Worth every cent, even at double the price!

It is a misty morning in the forest and Flit the fantail chick is practising his landings. He slips on something round - he has found eight rubbery white eggs. But whose could they be?

Join Flit and his friends, Kiki the kaka, rascally robins Bit and Bob, Keri the kiwi, and wise old Ruru as they try to figure out who the mystery eggs belong to.