Make Your Own Paper Dragons review 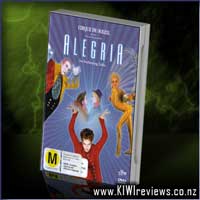 The creators of the world famous Cirque du Soleil bring their enchanting fantasy and amazing talents to this timeless story of love between an impoverished street mime, Frac, and Giulietta, the beautiful young songbird of the circus.

Alegria is the first feature film inspired by Cirque du Soleil, an internationally based performance ensemble that uniquely blends traditional circus arts with the expressive possibilities of theatre, dance and music.

Alegria, the film, is far more than the documentation of the live event. Instead, the cinematic medium has been employed to expand and transform the Cirque's dreamlike imagery out of the Big Top and into the real world, introducing a narrative love story enacted by a distinguished international cast.

When it comes to circus acts, there are none who have really come close to the ever-changing troupe known as Cirque du Soleil. Many new circus acts have taken their inspiration from Cirque's unique and haunting style, and imitation is indeed the sincerest form of flattery, which only goes to highlight just how much of an impact a proper show can have.

Having never had the joy of seeing Cirque perform live, despite a couple of tours of NZ, it was a real pleasure to get this DVD to watch... and it blew me away! I was expecting the usual motley edit-job from a half-dozen cameras scattered around the big-top during a couple of their shows, but the acts have taken a back-seat to the story and the characters themselves, and in a way this has added a whole new dimension to the story. Somewhat like a fairytale acted out in the streets of Berlin, Germany, this story tells a love stroy like no other.

The characters are full of rich depth and colour (even the black'n'white ones) and there are quite a few famous faces cropping up throughout... most are mere cameos, but if you are sharp of eye and wit, you'll see them. My favourite is Whoopie Goldberg making a stunningly short appearance, with only 2 scenes containing her, and a mere 2 words of dialogue in total!

Overall, if you are aware of the troupe and their world-shaking performances, you'll understand why this is something special, even though the show acts make, at best, brief appearances throughout. In a strange way, this reminds me a lot of Neil Gaiman's movie, Mirrormask. Far less 'trippy' but no less enthralling and fantastical. A winner, and from the sounds of it, just the beginning. I hope to get my grubby mitts on any future releases... in this day and age, it's about the healthiest way to get a dose of unreality... and we can all use an occasional break from the 'real world' at times, even if it is for only 89 minutes...

A group of friends on their way to a college football game fall prey to a pair of murderous brothers in an abandoned small town.

They discover that the brothers have expanded upon the area's main attraction- the House of Wax- now the group must find a way out before they too become permanent exhibits in the House of ... more...