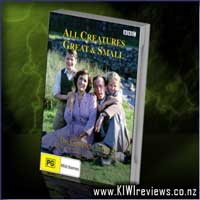 Based on the best-selling novels by James Herriot, All Creatures Great and Small is a wonderful, heart-warming series that the entire family can get together and enjoy. Series Four sees much of the material taken straight from Herriot's fourth book, "The Lord God Made Them All', and is somewhat more serious than the previous three series'.

The setting is now the early Fifties, and the Dales are still suffering from the bleak austerity that gripped all of England after World War II. Times are changing for the small town in the English countryside, and the people must learn to grow, stumble and adapt to their post-war lives. James Herriot (played by Christopher Timothy), suffers a loss of innocence of sorts after returning from the war and over the ten episodes from Series Four the changes within him become more pronounced. Now that Tristan (Peter Davison) has landed an exalted position in the Ministry of Agriculture and Fisheries, the small Darrowby practice recruits a young Scottish vet Calum (John McGlynn), who arrives by motorcycle with a badger in his luggage, and a fresh burst of energy for the team!

This takes me back... to my childhood and an age of innocence, well, for me at least.

Every Sunday night, the whole of the Diogenes family was curled up in front of the TV to watch the adventures of James Herriot in the scenic Yorkshire Dales. This was always used as a threat to behave, because any misbehavior would mean forfeiting All Creatures Great and Small. And that was something none of us kids wanted to miss.

So, some *Cough* years later, putting the disk in the DVD player and pressing play, I am surrounded by that familiar sound, and that sound alone brings back memories of Sunday roast and roaring winter fires.

Herriot is just as I remember, accompanied by all my old favourites. Helen, Seigfried, Tristan - and that chap who rings to say he is in the 'Telephone cossak' saying his pig is dying from semolina.

What can be said? This is a total nostalgia fest for me, something I feel an utter pleasure to review and something I would not miss.

Putting on the disks the first time, my daughter called "Boring" but ended up sitting through more than one episode and would have sat through more had she not been sent to bed.

Clearly, after all these years, the magic of Herriot has captured a new generation - and that is the mark of a good, classic family show. Well Done BBC for releasing this show - and, I eagerly await the next series.

The timeless classic stage musical every family should share. Based on the book by Howard ... more...