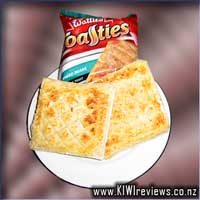 We all love a good toasted sandwich. But sometimes we can't be bothered making them. Now Watties has solved that problem with their new range of pre-prepared Toasties. These are a true heat and eat snack. Simply take one out of the freezer, drop it in the toaster and you're away laughing. Toasties come in a range of flavours including Baked Beans; Ham, Cheese & Onion; Cheese & Onion; Corn & Cheese; and Cheese Lovers.

I have had many types of beans before, including Watties, but I've never had Wattie's beans that had such a weird back taste. The sandwich looks good when you manage to toast it well, but there seemed to be a shortage of substance. Toasting this sandwich was almost a lesson in juggling trying to get it toasted right on both sides. A little trial and error and all was good though.

I will be looking for the other flavours in the range, but this particular flavour comes low on the list.

By far the worst of the range. Very little in the way of filling and they did not taste like normal Watties baked beans at all. Really not all that impressed with these ones. Still as easy to cook but the end results are just not really up to standard.

I am a fan of baked beans. Have been as long as I can remember so I was really keen to try these out. Really easy to cook of course, just dump them in a toaster and run them through a couple of cycles, flipping them over in between to make sure they get browned evenly. Nothing worse than a toastie thats bread on one side and charcoal on the other eh. After trying a couple on their own I was a little sad at the thin spread of filling. Basically a layer 1 bean thick and not very full. Some decent amount of beans and some cheese would have really set these off nicely. For my second trial packet I thought I would do something a bit different so I tasted them up as normal but while they were cooking I sliced some tasty cheddar cheese and poached a couple of fresh eggs. Grabbing the toasties I slapped them on the plate, slapped some cheese on top and covered them with poached eggs to melt the cheese. This turned out to be the winning combo for me when topped with a dollop of tartare sauce and some pepper and salt with some tomato wedges on the side. They make part of a really nice meal but a bit of a weak snack.

Despite their more unfortunate side-effects, or should that be lower-effects, beans are a very healthy food. High in natural digestive fibre and protein they form an important part of our dietary needs. Many breads are also great sources of natural fibre and all provide carbohydrates for slow-burning energy over longer periods. So this is probably one of the healthiest of the range, BUT... I have to agree, there is a definite shortage of beans in the sandwich.

However, despite being a little light on the filling, it is still a toastie for the bean lovers. The flavour of hot beans and toasted bread is just... somwething at the heart of being a Kiwi! And who better to bring it to us than Watties... makers of NZ's most beloved baked beans and spaghetti. Speaking of which... where's the Spag Toastie, folks?

Overall, the shortage of beans is a big let'down for what could have been a top-notch toastie. What could have made this one better would have been the addition of cheese, or bacon, or even ham. Maybe one of them will be in Toasties II - The Son of Toastie.

After trying the Cheese and Onion toastie, I wanted to try some other flavours.

I chose the Baked Bean toastie as my next flavour in the range. As usual, in the toaster it went and it was ready in about 4 minutes.

It was great how the toastie stayed together and intact, unlike traditional toasties which often spill out the filling (baked beans and spaghetti seem to be the worst offenders). The light, crispy outer 'toast' (I think it tastes like a cross between puff pastry and toast) held the filling together perfectly with no spillage. I did have one gripe with this particular flavour: there weren't enough baked beans in the toastie.

Nutrition wise, I think you could do a heck of a lot worse in the frozen convenience snack range - e.g pies, pizzas and toppers which are full of fat. These are definitely a lot more nutritious than those kinds of snacks - especially this particular flavour which I would imagine is the most nutritious in the flavour range.

Another great flavour, just needs more filling. As I said in my Cheese and Onion Toastie review, this Baked Bean Toastie would be perfect for a portable breakfast on the run.

She was opened in 1988 at a big site in the Foodtown carpark, re-located to her current site on the Square in August 2001, and is still one of the most popular dining destinations in PN.

Her original concept was fashioned around a large Pizza style BYO restaurant that provided a delivery and takeaway service as well.