ProdID: 138 - A Crow Left of the Murder
Performed by Incubus 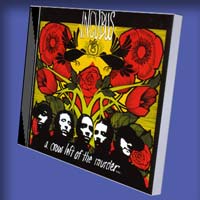 Disclosure StatementFULL DISCLOSURE: A number of units of this product have, at some time, been supplied to KIWIreviews by the company for the purposes of unbiased, independent reviews. No fee was accepted by KIWIreviews or the reviewers themselves - these are genuine, unpaid consumer reviews.
Available:
02/02/04

A Crow Left of the Murder product reviews

One of the biggest alt-metal bands of the last decade, Incubus are back in 2004, bigger and brasher than ever, with their brilliant fourth studio album, 'A Crow Left Of The Murder'.

This Limited Edition package comes with a bonus DVD featuring previously unrealeased live footage from both Lollapalooza 2003 and the Bridge Benefit concert, previously unreleased interview footage and footage of the band recording the album.

After the hugely popular 'Morning View', Incubus would have been very much had a struggle to beat it, and consequently they didn't. But neither were they aiming to.

Incubus have always stated that they don't want their albums to be compared to each other, or ranked, as each album represents themselves as a band during the period of time in which they wrote it, and that it has little bearing on the fans expectations. Incubus refuse to remain within anyone genre; moving from funk, to rock, to pop, to jazz.

In their interviews, they do make a great point when they mention that when you compare albums to past works, you end up being too over critical. Looking at the album on its own, without any background, it is a great album. In its entirety, I'm not a great fan. It seems to ebb and flow, but doesn't move as a continuous piece. It feels slow and uncoordinated.

But looking at the album, not as a journey, but as a collection of songs, it is amazing. Pick any random song, and have a listen. You have great hits such as "Sick Sad Little World", "Southern Girls", "Talk Shows on Mute" and the ever popular "Megalomaniac".

This is a truely great album. I am a fan of Incubus and they have done it again. This is a great cd made up of 14 tracks. The best song, I'd probably have to say 'Megalomaniac'. Also good are 'Sick Sad Little World' and 'Talk Shows On Mute' but I'm sure you can make up your own mind.

This cd is a continuation of the greatness shown throughout the bands previous cds. Other cds they have done are 'Make Yourself', 'Morning View', 'S.C.I.E.N.C.E' plus others, all worth checking out.

All up a great cd once again the Incubus crew have shown real talent.
Excellent.

These guys have been around for quite a while - an achievement in it's own right - and they are always exploring new sounds to keep things interesting. With this album, they seem to have found a groove and are happily rutting along it. The feel of the album is much along the lines of food from a certain prominent fast-food 'restaurant' who shall remain McNameless... it's all different things, but with very similar textures, with a few lumps thrown in to confuse the issue.

Now don't get me wrong, this is not actually a bad thing at all! It means, for a start, that if you hear any of the songs and like them, you'll probably enjoy most of the album. The notable exceptions to the general texture of the album are the intro's to Tracks 1 & 7, where the use of harsh, discordant noises (sorry, those bits could NEVER be called music) sort-of broke you out of any dreamy playland you might happen to be in at the time.

Track 2, on the other hand, was very pleasant indeed! Persoanlly, I feel that this song, (the title track) was the highlight of the album IMHO. I was also tickled when I realised that the cover-artist had hidden the first three lines of this song in the cover-art. Can you spot it? I saw it by accident, but if you look at the inside-back cover under the disc, you'll probably spot it fairly rapidly.

Tracks 4, 10 & 13 were really smooth and cruisy... an auditory balm to the sore ears caused by the energetic tempo and lyrics of the rest of the album. 4 Tracks I really liked, and 10 that I could listen to again easily, so long as I wind the volume down a notch in places. If you like the heavier music, you'll probably do the opposite.

Overall, quite a stunning album in many ways, and despite not really being into this genre much I would probably have been willing to buy it. I mean c'mon, how many bands have an ENTIRE album that any one person is going to like? So long as it has 3 or more, it's got to be worth getting. And with a bonus DVD (which I unfortunately didn't get to see) this has to be good value!

This sure fits that bill folks!

Filmed on November 22 & 23, 2003 in front of emotionally charged audiences at the Point Depot in Dublin, Ireland, David Bowie's 'A Reality Tour' DVD commemorates the rock legend's first concert film in over 15 years!! The DVD hits stores today...
Hailed by fans and critics alike as the best performances of his career, Bowie's hugely successful 'A Reality Tour' (his first major tour in a decade) in support of his latest album 'Reality' was ... more...