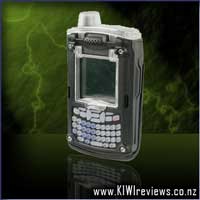 Features of the Case:
•  Dustproof, drop and crush protection
•  Easy access to all Treo ™ functionality
•  Charge and sync through the case
•  Optional SD POD allows for the use of an SD barcode scanner for warehouse, shipping, and asset management applications.
•  Phone usable through the case

First impressions... Beam me up, Scotty, resistance is futile! Looking like something the Borg would have carried with them and used to teleport around, this little plastic god-send converts your fragile Palm Treo PDA-Phone into something capable of handling almost any environment.

To test the unit, without putting my precious Palm at risk, I used a hotwire rig and carved myself a replica of the Palm, then coated it with a thin film of petroleum jelly, and over that a sprinkling of jelly crystals. The crystals are quite a dull colour until they mix with water, at which point they flare a bright shade of purple... easy to detect after each test run. And then... the fun bit.

I took the unit with me into the sauna room at the local public pools. This was simply to test the lower-end of the water-proof claim. Though the unit is sturdy and tough, and all openings are sealed with rubberised O-ring seals, moisture under pressure could seep through... and under heat, water vapour has plenty of urge to seek cooler airspaces, such as those inside this casing. However, after a rather uncomfortable hour in the steamer, I felt like cauliflower must feel, but there were no signs of purple stains on my mockup PDA. First test: Passed.

For the second test, to simulate rainy enviroments (because perversely, though it is winter here, there was no rain in sight!) I took the unit into the shower with me and ran it on a reasonably cool temp. After the sauna, this was a relief, for about 2 minutes until my body adapted and then it was shiver-city for me! However, after 15 minutes in there, the unit still showed no signs of breaking any seals. Second test: Passed.

Third test was easier on me at least... I dropped the unit into a bucket of water and left it there for an hour... to simulate heavy-saturation environments, such as working in a drainage ditch, or dropping it on a beach and having to hunt for it in the shallow tideline. An hour passed while I dried and warmed up... after which a quick dry-down of the outside of the unit, and opened it up to find... no activated jelly crystals! Third test: Passed.

Now for the final test... dropping by the local watch repair shop, I got the short-term loan of their pressure-tester unit. This operates in a strange, but safe way. The unit is a sealed chamber full of water, with an air-pump on it. The Otterbox case was placed inside and the cabinet sealed. Air was pumped in until the water pressure was about the same as taking this unit about 0.5m underwater. To be fair to the seals, I asked that they leave it for about 1 minute, then bleed off the pressure slowly. Once this was complete the unit was removed from the pressure tester and dried off. When I cracked it open I found... some patches of purple on the unit around one of the seals. This showed that SOME water had managed to make it in... still, for a unit that only claims to be "... water resistant, NOT waterproof..." I felt that it had done far better than expected, since there was only tiny amounts of water evident, which had been soaked up by the jelly, leaving none 'free'... indicating that the amount of water that got through was miniscule at best. Fourth test: Borderline.

Now, after all that, I dried the unit thoroughly inside and out, and inserted the real Palm Treo 650. This was a really simple and smooth operation. Now it was time to see how it handled in day-to-day situations. The keypad on this unit was simply a pile of push-rods really, designed to line up and operate the buttons on the unit itself. The only one that caused me any issue was the top-center navigation button, which didn't line up exactly and would miss if I didn't press it straight-on. Not a biggie, as I hardly ever use the nav buttons, preferring to use the stylus instead, which comes out of the PDA and clips securely onto the right-side of the casing.

The hard flip-up cover over the screen works very well to avoid accidental pressure being applied during travel, preventing the user from finding that their daily schedule now consists of random jitterings and 4 hour long appointments with 'ghaweslogfof sdhkj 33'... whatever that is... where once it contained an important and urgent meeting with... someone... I think... -gah!- (Yup, this has happened to me more than once.)

It even allows clear use of the PDA's onboard camera, and no noticable loss of image quality... but then, with the picture being, at best, 640x480... there isn't a lot of quality there to lose really.

My one and only gripe with this unit... when it is sealed up tight, it SEVERLY mutes the speakers, meaning that I was forever missing the alerts and ringtones when it was in my pocket, and grabbing the phone at the last second, if in time at all. often it was my young son telling me that "...your pocket is burping, dad..." which alerted me to the fact it was ringing at all! This was solved, mostly, by cracking the rear main catch, partially unsealing the top clear hatch... which completely defeats the whole purpose of the casing, doesn't it.

Overall, a great unit to have on hand if you plan to use your Palm Treo more in PDA mode than in phone mode. If you plan to have it as a phone as well, but operate in enviroments where moisture could be a concern, you would be wise to invest in some form of personal Bluetooth Handsfree unit, and program your Treo with voice-dialling. It looks stupid, walking around talking to another Borg personal fashion accessory, but it allows you to protect probably the most valuable piece of day-to-day equipment you own. An excellent investment indeed.

An 8MP rear camera coupled with a state-of-the-art blue ... more...