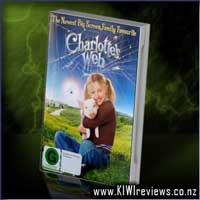 The classic story of loyalty, trust & sacrifice comes to life in this live-action adaptation. Fern is one of only two living beings who see that Wilbur is a special animal as she raises him, the runt of the litter, into a terrific & radiant pig. As Wilbur moves into a new barn, he begins a second profound friendship with the most unlikely of creatures - a spider named Charlotte - and their bond inspires the animals to come together as a family. When the word gets out that Wilbur's days are numbered, it seems that only a miracle will save his life. A determined Charlotte - who sees miracles in the ordinary - spins words into her web in an effort to convince the farmer that Wilbur is 'some pig' and worth saving.

DVD Special Features:
•  Commentary by Director Gary Winick
•  Commentary by Producer Jordon Kerner and Visual Effects Supervisor John Andrew Berton Jr
•  Making Some Movie
•  Some Voices
•  Flacka's Pig Tales
•  How Do They Do That?
•  What Makes A Classic?
•  Where Are They Now?
•  Music Video "Ordinary Miracle" by Sarah McLachlan
•  Music Video "Make A Wish" by Bob Carlisle and Lucy Kane
•  A Day At The Fair
•  Farm Photo Album
•  Gag Reel
•  Deleted Scenes With Optional Commentary by Gary Winick

I grew up with Charlotte's Web being one of my favourite books it was one I never got sick of reading. In fact I still have my old dog eared copy of Charlotte's Web which has seen better days but it's one I will never part with. As soon as I saw a movie being released I had to see it, since then I have brought it on dvd and watch it often when kids come to visit.

Charlotte's Web tells the tale of some of the most unlikely friendships between human, pig, spider and rat. Throughout the heart warming tale we learn that each character plays an important part in helping create a miracle which ensures Wilbur the pigs life on the farm. As with the book I always have parts of the movies where I find myself tearing up.

The casting for the movie is just perfect and so many great actors lend their voices to the animals. Each one brings the much love characters to life, just as you imagine they would sound when reading the book. Julia Roberts as Charlotte is perfect she brings so much grace and beauty to the role, which is hard when her role is that of an animated spider!

Charlottes Web is a wonderful book brought to life in this lovely little movie. Based on the book by E. B White. As of the year 2000 Charlottes Web by White (published in 1952) was the best selling children's paperback of all time. So knowing this there was little worry that the movie was going to be a fail.

A beautiful story of friendship, trust, loyalty and loss (sacrifice), that is sure to make you laugh, bring a tear to your eye, and give you the warm fuzzies. It is in my opinion a beautifully made film. The animals are brought to life perfectly, and the voices are just as I imagined they would be. Your emotions run high while watching this movie. This film is a truly inspiring and beautiful movie that everyone is sure to enjoy. And the messages / lessons it can teach your children are clearly shared.

The DVD also includes extra special features, with commentaries, photos, music and more bringing to life (a little more) the story of Charlottes Web. As with any DVD one of my favorite special features are the deleted scenes and my absolute favorite features are the gag reels (bloopers). Charlottes Web does not fail to deliver both as a wonderfully well produced movie but also with all the extra features. Two thumbs up.

Another fantastic moving staring Dakota Fanning. The original of this movie was one of my childhood favourites, and usually remakes of movies are a let down, this was the not the case. This movie is just as magical in this version especially for the generation it is aimed for.

The story line has many ups and downs, and the always tear up during the film. This perhaps is not suitable if your child is very sensitive when the viewer hears that Wilbur's days are numbered.

Overall this is a great family movie that should be seen by all family's together at least once! It will not disappoint and it really brings the message and meaning of friendship home.

As a remake of an old favourite kids' movie of mine, I sat down with my 6 year old son to watch Charlotte's Web, wondering "will it be better than the older version?"... after all, with everything they can do these days in regards to movie making, it certainly seemed to be the logical conclusion that it would.
Many of the voices were instantly recognisable, and the cast was indeed a rather enjoyable one, with Julia Roberts being well suited to the role of Charlotte the spider, giving her a sense of grace and charm, just with the use of her voice.
As for answering my initial question though...
Although it was still a very enjoyable movie to watch, and my son has thoroughly loved it both times he's watched it (so far!), I found it to be lacking some of the magic that the original making of Charlotte's Web gave, and it was also very similar to the 1st of the Babe (the pig) movies. so although this version will be remaining amongst my collection, I think I'll be sticking to the original version, although my son will probably get plenty of wear and tear out of this one.

In the near future, a weary Logan cares for an ailing Professor X in a hide out on the Mexican border. But Logan's attempts to hide from the world and his legacy are up-ended when a young mutant arrives, being pursued by dark forces.