The Saga of Seven Suns : 5 : Of Fire and Night review 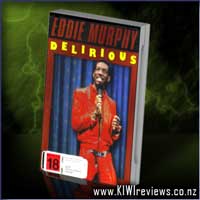 Disclosure StatementFULL DISCLOSURE: A number of units of this product have, at some time, been supplied to KIWIreviews by the company for the purposes of unbiased, independent reviews. No fee was accepted by KIWIreviews or the reviewers themselves - these are genuine, unpaid consumer reviews.
Available:
March 2007

The year was 1983 and NOTHING was sacred! Jokes about puberty, dating, Mr. T, disciplinarian mothers, and the personality traits of Michael Jackson were all fair game when the man in the red leather suit took the stage!

I thoroughly enjoyed this stand up comedy, and in fact when people visit I put it on so they can enjoy it too.

He was very well versed in each person he joked about.

Eddie Murphy is one of my favourites, and I try to watch everything that comes out with him.

It is very crude and very funny, if you want a good laugh, this is what you need to get :)

Eddie Murphy has been on our screens for many years... I first encountered him in the Beverly Hills Cop series of movies, and have laughed ever since... but I didn't know much about his stage performances, so it was a great insight into Eddie's early days to watch this DVD.

Rude and crude was the order of those days, swearing was shocking, shocking was new, and new was funny... so Eddie got out on stage and tore famous faces to pieces. Mr T asking for some seriously naughty nookie, Michael jackon asking for, well, anything really... it all went into the Murphy-mill and came our raw, raunchy and full of laughs.

For sheer stage style, I still say Billy Connolly has it in aces, but Eddie was running a very close second, and probaby rated higher with the African American demographic simply because they understood him better and wouldn't take offence at most of the black-jokes.

Overall, delirious? Maybe... Hilarious? Definitely! For the adult with a rough and ready sense of humour, this will be a 70-minute laugh-a-thon! Maybe they could have crammed a few more snippets onto the disc, for surely Eddie didn't perform only one show in his entire career, but thems the breaks and it's still well worth the viewing. I would end the review with a quote from the show... but I can't find one long enough without having to try and insert -beeps-!

Star Trek: Voyager's sixth season continues the adventures of the Voyager crew led by Captain Janeway. While Janeway and Chakotay are keen to return to their former lives, Seven Of Nine is forced to face up to her past...