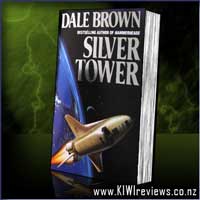 The Silver Tower is America's first permanent space station. Its primary function is to conduct experiments on space-based lasers for America's defence against intercontinental ballistic missiles. But on Earth, far below the Silver Tower, tensions between the Soviet Union and United States are reaching breaking point.

From Turkey, the US Rapid Deployment Forces mobilise to stop a Russian invasion of Iran with bombing raids from F/A 16D fighter-bombers. But the Soviets go on the offensive and launch intermediate-range nuclear missiles. What follows is a dramatic, all-too-plausible chain of events leading towards the first nuclear war in space.

As a fairly avid Dale Brown reader, I enjoyed his Dreamland series, and was eager to read this series also.
This book is very unique. I would almost stray across the line and describe it as a hyper-fiction. With activities such as Spacewalks and lasers, russian spaceplanes and such, I believe the plot is possible and attainable, in maybe twenty or thirty years. But Set in 1991? I dont think so.

The storyline has a good base, referring to past books, or activities in past books. The book is definitely re-readable, but it has been set out so if you haven't read any previous books in this series, you won't be left in the dark about any major events.

I could lose track of time while reading this book, but I would have to be quite isolated, and away from distraction to do it.

Overall a good read from Dale Brown, a few holes to pick, but such is life with books. I recommend these books to anyone who is into Tom Clancy, and other authors of the same genre.

Field notes and other data from the Resource Development Administration's xenobiological research and scientific labs have been compiled as a guide to the many unique aspects of the moon Pandora. This report details Pandora's alien ecosystem; its mining mother lode and topography; its flora and fauna, and the culture, language and physiology of the native population, the aggressive hunter-gatherer race called the Na'vi.