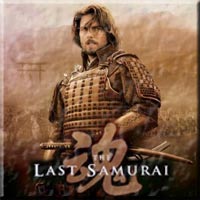 Captain Nathan Algren (TOM CRUISE) is a man adrift. The battles he once fought now seem distant and futile. Once he risked his life for honor and country, but, in the years since the Civil War, the world has changed. Pragmatism has replaced courage, self-interest has taken the place of sacrifice and honor is nowhere to be found - especially out West where his role in the Indian Campaigns ended in disillusionment and sorrow.

Somewhere on the unforgiving plains near the banks of the Washita River, Algren lost his soul.

A universe away, another soldier sees his way of life about to disintegrate. He is Katsumoto (KEN WATANABE), the last leader of an ancient line of warriors, the venerated Samurai, who dedicated their lives to serving emperor and country. Just as the modern way encroached upon the American West, cornering and condemning the Native American, it also engulfed traditional Japan. The telegraph lines and railroads that brought progress now threaten those values and codes by which the Samurai have lived and died for centuries.

But Katsumoto will not go without a fight.

The paths of these two warriors converge when the young Emperor of Japan, wooed by American interests who covet the growing Japanese market, hires Algren to train Japan's first modern, conscript army. But as the Emperor's advisors attempt to eradicate the Samurai in preparation for a more Westernized and trade-friendly government, Algren finds himself unexpectedly impressed and influenced by his encounters with the Samurai. Their powerful convictions remind him of the man he once was.

Thrust now into harsh and unfamiliar territory, with his life and perhaps more important, his soul, in the balance, the troubled American soldier finds himself at the center of a violent and epic struggle between two eras and two worlds, with only his sense of honor to guide him.

although i enjoyed the movie and the effects, the story that was told took a long time to get to the point at where it was going in some direction.

The movie has some great war scenes and I enjoyed it for the most part, although I do not think that it is one of the all time greats. I liked the fact that it was something different from just the American War epics that you seem to see these days.

I recommend seeing it but do not know if it is quite worth the money to go see it in the movies.

After putting off seeing this movie, because of more interesting-sounding ones screening at the same times, I finally went to see this. As I walked out, I was not at all surprised by it's nominations for 4 Academy Awards: Best Supporting Actor (Ken Watanabe), Best Sound, Best Costume Design and Best Art Direction.

This movie was brilliant, an illuminating insight into feudal Japan as it attempted to deal with the 'modern' world's encroachment into it's highly structured and military mentally. The Emperor was known to be a Living God, who's merest whims were law. With the power to simply ask a loyal general to take his own life, the general would willingly, and happily, do so, believing it to be divine command.

So when the young, and weak-willed Emperor is controlled by a business-minded railway tycoon-in-training, Japan falls victim to intrique and deceit, the likes of which it hadn't known for centuries.

Into this corrupt mix of cultures are thrown a soul-torn American soldier who's only relief from the pain in his heart is to be found at the bottom of a whiskey bottle, a Scottish soldier with a quirky sense of humour (excellently portrayed by a personal fave of mine, Billy Connolly - who should NOT have died so early in the movie!), a British photographer with weight issues, and a swag of renegade Samurai who are fighting to save the Way of the Samurai from being diluted and weakened by the Modern World being brought into Japan by the Emperor.

This movie had me hooked, totally. The last movie that enthralled me this way was Xanadu, when I was about 4 years old. (Olivia Newton John, on rollerskates, in a miniskirt, even at 4 I thought she was wonderful!)

Overall I would have LOVED to have given this movie a Pure 10, but the Pay to see it again factor had to be dropped down, simply because of the prices the cinemas charge these days. However, to offset that slight discount, I will say that I will happily pay full price for the DVD when it goes on sale!

Introducing a barnyard full of captivating characters unlike any you've ever met! There's farmer Hoggett; Fly, the sheep dog; Rex, her shepherding partner; Ferdinand, the quacky duck; Maa, the elderly ewe; and the newest addition Hoggett Farm, Babe, a most unusual Yorkskshire piglet. It's a delightful story the whole family will love!