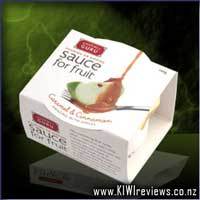 Take something that tastes great - fresh fruit, add a little inspiration - our sauces, and very quickly you can create an irresistible snack or dessert.

We've taken the time to discover the right sauce for the right fruit, so that you can ensure every mouthful is a memorable one.

Great for pouring or dipping.

I love these sauces. Great with any fruit but I love the serving suggestion on the box. I love the chocolate sauce the best, but they are all great.

I know it says 'sauce for fruit'....but I could think of even better ways to be honest! We tried this one drizzled over ice-cream first, which was just great - really hit the sweet tooth! Secondly, we tried using some in a smoothie with banana, ice-cream and milk (since banana and caramel is usually a great combo!) We weren't disappointed - it took the smoothie to another level and was definitely a great combo.
These sauces would be great for a fruit platter, or a banana split dessert. Really yummy!

By far my most favourite flavour. I love it as a dip in the middle of the mixed fruit platter, as a sauce for the ice cream and I love it as an extra flavour boost to the thick/milkshakes. I plan to buy some more while pak'n'save has it at half price and use it with some of the treats at my kid's school fair soon. Great stuff.

This one also way goooooooood. Cinnamon definately takes apples to another level - but adding caramel as well, that's like flowers to hippies. Only glitch I could find with it was that it's best when the apples are in sections, gets a bit messy dunking the whole apple in the tub.

Probably my favourite of the sauces I tried, this one really is delightful. I decided to join the "experimental in the kitchen" bandwagon, and got busy with the foodie things... I started off making a Banana Split and, after warming the sauce up, drizzled it liberally over the dessert, then tucked in. Delisho! Loved it so much, I started to plan for dessert the next night... waffles I think...

Next night rolled around and it was time to unpack the waffleiron... alas, the Rust Fairy had paid it a visit one or two thousand times, and so it was off to buy a new one. After much cleaning, batter-making, and waffling... I had a stack of plain waffles ready to snarf. Layer with sliced banana and strawberries, a hefty scoop of vanilla ice-cream and a careful overdose of sauce... 15 minutes later I was discovered lying back in my chair with a huge grin on may face and a bloated tummy.

The following evening brought about something a little different... I recently started making home-made chocolates (as a diversion from the housework) and thought about filled choccies, and how you need to paint the outer shell into the mould first, then blob in the filling, then finally seal what will become the base with another layer of choc... well, since I didn't have any of the 'normal' fillings, I thought I would try this sauce. Since it is quite thick at room temperature, I decided not to warm it up, as keeping it thicker would make it easier to use in this case.

A few hours later, once all the chocolate had set, I was able to give these a test run... just to check the taste, of course...

Wow! Caramello, eat ya heart out! The cinnemon really adds a new dimension that has decided me... I plan to make a LOT more of these as gifts for friends...

Overall, quite possibly one of the nicest sauces I have tried from the range.

Mmmmm cinnamon. And caramel. But, mmmm, cinnamon. What fruits can't be enhanced by the flavour of cinnamon?

Ok, so it typically goes with apples, but the warming flavour of cinnamon enhances so many more foods. Why do you thing the Chinese add it to a lot of their stirfries. I can see sooo many uses for this one - along with cakes, popcorn, fresh muffins, pancakes, pikelets, apples, strawberries and many, many more fruits. Just try it. You will see.

I could waffle on (Mmmm waffles and cinnamon caramel sauce) but I must get to the kitchen to finish off the pot...

Having tried the Chocolate sauce and absolutely loving it I couldn't wait to sample another of these fine sauces and when I spotted the Caramel and Cinnamon I knew that had to be the next one to try, so I grabbed an apple from the fridge, sliced it up and dipped into the sauce. Yippee another winner, this one brought back memories of homemade apple crumble or apple shortcake, you know the kind that has a liberal flavouring of cinnamon added to give it that perfect flavour, well this sauce has all that along with the added bonus of delicious caramel added to the mix. Now unfortunately i've had to drop the score slightly, but only because I couldn't think of too many other uses for this sauce besides dipping whatever fruit took your fancy, but no doubt someone out there has had some inspiration on whatelse could be done using this fine product. In fact if they were still doing 3, 2, 1 Cook on TV it would be interesting to see what they could do with this.