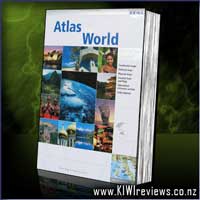 The Atlas of the World has over 100 pages of full cover, up-to-the-minute, detailed reference maps. Useful facts and statistics are provided for each country, and there is an informative introductory section covering a wide range of topics, from the solar system to the history of mankind and from plate tectonics to the population explosion.

Nightflyers and other stories
Rating: 9.0

Your one-stop guide to our planet and it's place in the universe, this is certainly a book any educated person would want on hand to present to questioning minds. With a young son just bstarting to hit the 'school projects' stage of his early education, this is a book that I will be going out to get for him... just a shame I had to hand it off to another reviewer due to the ever-growing stack of review books sitting on the desk eyeing me up accusingly...

However, this didn't stop me from giving this one a full eye-over from hardback cover to cover. Tough and durable, and in a hardcover storage sleeve, this is a tome worthy of a place at the head of the reference section in any home library. With detailed maps showing not only the physical landmasses, but also the current political boundaries of the world... well, as current as they can be really... with internecine playground-sandpit wars being fought across the globe, you have to wonder sometimes why we bother with national boundaries. Each morning wake up and vote on who you are going to listen to today, and that's your 'country' for the next 24 hours.

Seems to be as good as another other current system to me.

But I digress... the atlas contains not only maps, but also a quick overview of the contries in the form of flags, currency, etc. as well as a section I found particularly intriguing, on the solar system. The only glitch I found was that it must have been published just before the recent astrophysics conclave that demoted Pluto to Dwarf Planet and recognised two others that fit the same bill, thus reducing our solar system to only *8* 'Planets' and a whole pile of planetesimals.

You have just GOT to love beuracratic b/s huh...

Overall, a stunning volume, seriously worth some heavy consideration if you have kids of any age, or just want to have something on hand to flick through when you watch the news and see a bunch of people fighting another bunch of identical-looking people and claiming they want their own patch of now-sterile and bomb-blasted dirt to themselves.

This is definitely a book I'd recommend to be added to the reference section of your book collection. The maps are extremely well detailed, and there are many useful extra bits and pieces, such as the section of flags with interesting facts included with each one (such as the main language, currency, capital, and even the international dialling code!!), and information about the solar system, population explosion, the weather, etc.
THE book to have if you're interested in travelling internationally, have school-aged children (great for those school projects!! I know my son will be getting a lot of use out of it), are in the tourism industry (as I am, and I have found this a great resource to have to aid my work), or even just want to work on your geography.

Humanity has colonized the planets - interstellar travel is still beyond our reach, but the solar system has become a dense network of colonies. But there are tensions - the mineral-rich outer planets resent their dependence on Earth and Mars and the political and military clout they wield over the Belt and beyond.

Now, when Captain Jim Holden's ice miner stumbles across a derelict, abandoned ship, he uncovers a secret that threatens ... more...