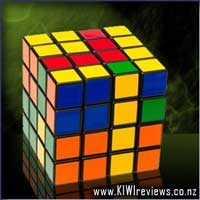 The super Rubik's cube. The 4 x 4 requires different moves to solve it than the original 3 x 3 cube, and it's more challenging!

For the true Rubik's Cube aficionado.

Wow what an addiction! I would recommend starting with the 3 x 3 Rubik's cube first before venturing into this next level challenge.These cubes have been popular with all ages for years and have really stood the test of time, so much so that other games and books have been developed off the back of them. We also have the Rubik's Race as well as a couple of books based loosely around the Rubik's cube idea.

When I first tried to do the cube I was flummoxed, but I am not one to give up on a challenge, so I kept trying. Eventually I went to the dark side and googled how to solve it. But sadly that doesn't give you the 'answer' you still have to work it out yourself. I am happy to say that now I have got the routine sorted I can solve it simply.

I love the fact that they are so readily available in many shops to purchase as well - they are not a hard to find toy to purchase. They are not a cheap toy, but are at a reasonable price that you don't mind paying as they seriously are great quality and should last the test of time.

Onto the next challenge which is wrapped up under the tree - the 5 x 5 Rubik's cube.

I loved playing with Rubik's Cube as a little kid and was excited to see its comeback...well come back into fashion. I always found the Rubik's cube to be challenging and frustrating!! but it was always entertaining and kept me amused and out of trouble for hours.

While I was at the Warehouse I saw some sitting on the shelf and just had to buy another one to try out as an adult and do you think I got any smarter over the years...ahhhhh no!! Still can't solve the Rubik's cube but had fun trying it!!

Then...during the school holidays my 10 year old niece came to stay and saw the Rubik's cube collecting dust on the book shelf and it took her less than 20 minutes to solve the cube!!!! Something that I wasn't able to do ever and she does it almost straight away...but I was never interested in maths and she loves it!!

I have been told that it is simple to solve and google the solution but I would rather not burst my bubble of dumbness and would rather stick with the frustrating challenge that the cube offers and maybe eventually one day I will be clever enough to solve the mystery all on my own.

I did get the Rubik's cube on special however so not sure if I would have grabbed one for the recommended retail price, but this is a toy that I would happily recommend to young children to challenge themselves with, and for any adult that wants to keep their brain ticking over!!

The Rubik's cube 4 x 4 scores top marks on everything from me...the reason being: My now 11 yo son is ADHD, he has cognitive, developmental, social and learning problems. His attention span next to nothing. But one day when he was 10 we were sitting in the doctor's waiting room, awaiting his usual specialist appointment, he found sitting on the table a Rubik's cube 4 x 4.

Now my first thoughts were, he will have a go at that for a second, but will then discard it for something else that he will spot out of the corner of his eye, or, he will stick at it for a few mins but when he can't figure it out, he will pull out his attitude that always follows when something is to difficult.

Well turns out, I was wrong...on both accounts! Now the specialist we were waiting on had already advised us that he was running late and we were looking at a wait of up to 45 mins...so it is with amazement - and thanks to the Rubik's cube

- that the half hour wait we did have to endure went without a hitch or drama of any kind.

Master 11 sat quietly without moving (a feat in itself), completely engrossed in the Rubik's cube for 20+ minutes. He twisted and turned, and pondered...managing to get half of it completed and leaving me totally in awe.

I was so so impressed by this that we went straight out and purchased him one that day. He still has never completed it, but he has never became bored with it and it keeps his attention for a really long time. Definitely worth every cent for us.

I have been playing with this for over a week now and I cant stop playing with it. I liked the original cube when it came out years ago and I didnt think they could make a cube even more frustrating but they did. I was surprised to read that this cube has been around almost as long at the 3x3 cube. I had never heard of this 4x4 one before it turned up in the courier bag from the review guys. I am not really a brainiac kind of guy so the puzzle part of it wasnt really a big thing for me but I enjoy the challenge of working out how it works. Engineering is more my thing. This thing is really stunning and I have really enjoyed playing with it to see how it works. Of course when my kid got a hold of it and threw it on the floor it fell apart and I got many hours of enjoyment just working out how to put it back together again. I did it so thats good. Now I can play with it a lot more. This puzzle is a lot of fun and well worth getting as a present for anyone you know you enjoys puzzle games and toys.

Whatever possessed me to attempt this 4 x 4 cube when I never even mastered the 3 x 3 cube I will never know. We are meant to get wiser with age - me? clearly not.

The rubik's cube was the toy of the 80's and despite the initial craze, it has never gone away with many, many cheap imitations still available and many crazed people still trying to complete some twentysomething years later.

Despite the popularity of the 3 x 3 cube, I had never encountered the 4 x 4 cube before now, and was surprised to learn it has been in existence almost as long as the 3 x 3 cube.

The movement of the original cube is far superior to the cheap imitations, and I suspect the movement of this puzzle will get more free with a little wearing in. I know that I will be puzzling over this one for weeks and months to come - more likely years!

A great puzzle suitable for all ages; however, I suspect each family member should have their own cube to prevent arguements over 'who has touched my cube?'

Babies will tickle their senses as they explore this squeezable elephant that features seven different engaging activities. Soft, crinkly ears, a squeaker and a clicking dial will delight babies' sense of sound. There's even a colorful, spinning rattle on the elephant's nose! Give it a twirl and babies are sure to smile. Little ones will love to discover the peek-a-boo mirror on the elephant's foot and a tethered teether in ... more...