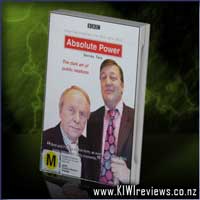 Disclosure StatementFULL DISCLOSURE: A number of units of this product have, at some time, been supplied to KIWIreviews by the company for the purposes of unbiased, independent reviews. No fee was accepted by KIWIreviews or the reviewers themselves - these are genuine, unpaid consumer reviews.
Available:
December 2006

Equally economical and creative with the truth, masters of the dark art of manipulation, Charles Prentiss (Stephen Fry) and Martin McCabe (John Bird) return for a second series of this satirical look at the machinations of the PR industry.

Whether it's rebranding the House of Lords as a new reality TV programme, 'The House', or softening up public opinion for an impending bid for British Airways by Osama Bin Laden's cousin, Prentiss and McCabe are masters of the art of manipulation. Backed by a similarly wily and unprincipled team, they know nothing is as bad as it seems, or indeed as good. No client's career is irredeemable and no opinion too difficult to sway. But when Charles advises an author to serve a prison sentence to publicise his book, has he gone too far? After all, all publicity is good publicity. Isn't it?

There are many instances where the second series of something cannot match the first series and begins to look tired and jaded quickly. Other series try to build on the initial success and try too hard and fail.

Happily, Absolute Power is not like those. The second series is just as sharp and cutting in its satire and humour as the first series. Stephen Fry is as sharp and professional and as thoroughly believable as he was in the first series, and is the undoubted star of the show. His supporting cast are stars in their own right because the show would fail without their presence. Their sub-plots add that Je ne sais quoi to the whole series.

Each episode can stand alone in its own right, making Absolute Power suitable for occasional watching when humour is needed, but can be blitzed for a laugh-a-minute marathon.

I hardly stopped laughing at the first series, I laughed even more for the second. I cry because there is no third series. I do live in eternal hope.

While King Leonidas and his 300 Spartans have their date with destiny at Thermopylae, another battle against the Persians is brewing, this time at sea. Themistocles (Sullivan Stapleton), a Greek general, sees the threat posed by the God-King Xerxes of Persia. He knows that he must unite all of Greece if he is to stand any chance of repelling the Persian invasion. Even if he accomplishes his mission, Themistocles must still face Artemisia (Eva Green), the ruthless leader of the Persian armada.