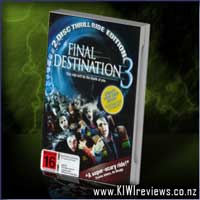 Fear Is Rising. This Ride Will Be The Death Of You.

On what should be one of the happiest days of her life, high school senior Wendy joins her friends for a graduation night celebration at a local amusement park. As they're about to board a roller coaster, Wendy is suddenly spooked. Her boyfriend Jason reassures her that it's merely the act of relinquishing control that's giving her the jitters. Wendy overcomes her fear, but no sooner has the pneumatic harness descended, securing her in her seat, than Wendy experiences a vivid premonition of a fatal accident in which the roller coaster becomes a death trap for her and her friends.

Final Destination was very much more of the same, that we have come to see in the previous films. Someone having a vision of an event that will kill them all, but they manage to avoid disaster and are then trying to avoid death as it tries to cut loose ends.

The deaths have become far more elaborate and convoluted, and therefore have lost most their punch. It has become far too interpretive. While they purposefully make fun of that aspect during the film, it nonetheless makes it more frustrating from the viewers standpoint.

One of the things that the DVD adds to the experience is the "Make Your Own Movie" where you can change an aspect of the movie (if you are quick enough to get to the remote). These changes however, are often irrelevant, and make little difference to the storyline.

Visually, it is well made. It is graphically gruesome and gory, but the methods of death, and overall plot, severely let down this film. All in all, this is the worst movie so far in the franchise, and I am pretty disappointed that they went on to make another two. They should have stopped at Final Destination 2.

Quite sadly, they did make a 3rd movie, and followed it up with two more. But it's not about those, it's about this one. It goes along the same path as the first two. Person has horrible vision, person manages to save about a dozen people, the people saved start dying horrific deaths whilst person #1 tries to stop the hand of death before it is too late for them.

There is nothing new in this movie, that wasn't done in the first two, the only difference is the mode of death and the fact that they decided to just get bloodier and gorier. Not the best movie, but I guess if there's nothing else on TV I will watch it again.

This, clearly, is a third installment in the 'Final Destination' franchise, and hopefully, the directors will not try to milk it for a fourth and fifth.
The film itself was thoroughly predictable and the plot was pointless. However, where the film does come into its own is 'create your own movie' track on the first disk.

Control does seem a little limited at times, when at key points you can make one of two choices. In more than one area, the outcome is not affected; however, it may have had an unnoticed effect elsewhere in the movie.

To me, the features on the second disk are more attractive than the main show, but that is just my opinion alone. To the fans of gore movies (one could hardly call it horror), then this will be a must in their collection.

Score: 9.0
Product reviews for listing 3795: The Blind Side
Directed by John Lee Hancock

Michael Oher knows little about family. Less about football. What the homeless teen knows are the streets and projects of Memphis. Well-to-do Leigh Anne Tuohy knows little about his world. Yet when she and Michael meet, he's found a home. And the Tuohys have found something just as life-changing: a beloved new son and brother. This real-life story of family and of Michael's growth into a blue-chip football star will have you cheering ... more...