ProdID: 1247 - Planet of the Apes
Directed by Franklin J. Schaffner 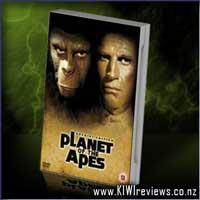 Price:
$39.95
Available:
Most online stores and some retail outlets.

Planet of the Apes product reviews

Somewhere in the Universe, there must be something better than man!

A legendary masterpiece, with enhanced sound and picture quality, the 1967 sci-fi classic Planet Of The Apes comes to DVD. Charlton Heston and Roddy McDowall star in this legendary science fiction masterpiece. Astronaut Taylor crash-lands on a distant planet ruled by apes who use a primitive race of humans for experimentation and sport. Soon Taylor finds himself among the hunted, his life in the hands of a benevolent chimpanzee scientist. Winner of an Honorary Academy Award for Outstanding Make-up Achievement and nominated for two Oscars, (1968 Best Costume Design and Best Original Score) Planet of the Apes is grand entertainment from its visually arresting beginning to its chilling last moment.

I fell in love with this movie when I first saw it, back when I was a young boy (it was already at least a decade old by then), I was just totally blown away by the realism of the apes.

When I got older and possibly a little wiser I began to understand the political and social commentary that was woven into this tale of a man struggling to make sense of his situation.

So when I saw this cinematic masterpiece on sale at a local store I just had to have it, and when I saw the extra features included in this two disk set I knew I had gotten myself a real good deal.

This is one film I can easily watch over and over again, and for those of you who have not seen this visually stunning tale (or the 2001 remake by Tim Burton) I cannot encourage you enough to go watch this film and I hope you are as stunned by the ending as I was the first time I saw it.

Score: 9.0
Product reviews for listing 8416: Ride Like A Girl
Directed by Rachel Griffiths

Biopic on Michelle Payne, the first female jockey to win the Melbourne Cup. Stars Teresa Palmer and Sam Neill. This is the feature directorial debut from actress Rachel Griffiths.