Planet of the Apes review 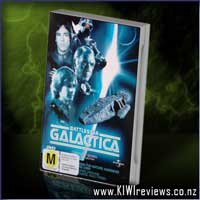 Disclosure StatementFULL DISCLOSURE: A number of units of this product have, at some time, been supplied to KIWIreviews by the company for the purposes of unbiased, independent reviews. No fee was accepted by KIWIreviews or the reviewers themselves - these are genuine, unpaid consumer reviews.
Available:
Most online stores and some retail outlets.

The seven-disc Complete Epic Series Box Set features all 24 x 45min episodes of the original series and is loaded with over 3.5 hours of newly produced and never-before-seen bonus features. The entire series has been re-mastered from original source materials for optimal picture and sound quality. It features both a newly created 5.1 Dolby Digital surround track and the original monotrack.

Hopeful for lasting peace following centuries of intense warfare, the Twelve Colonies gather to sign a treaty with their dreaded enemies, The Cylons. But after an act of treachery on the eve of the ceremony, the Cylons launch a devastating surprise attack, destroying the Colonies' home planets and most of their military strength. A lone flagship battlestar, the Galactica, remains to aid the surviving colonists on their epic journey for a new home to a far-off legendary planet - Earth.

They must survive the pursuing Cylons in a series of epic battles that will determine the fate of the human race in this non-stop action-packed classic filled with cutting-edge special effects by John Dykstra (Star Wars, Spider-Man).

The leaders of the twelve human colonies are making plans to sign a peace treaty with their mortal enemies, the Cylons. On the eve of the ceremony, the Cylons attack and destroy most of the colonies. The remaining Colonial ships, led by the battlestar Galactica under the command of Adama, head out into space and seek out a "lost" 13th colony, which turns out to be Earth. Along the way, the Colonials encounter various races (both friendly and hostile), the legendary human warrior Commander Cain, and the planet Kobol, the mother world of all the colonies. All the while, the Cylons - led by the human traitor, Baltar - are in hot pursuit...

It's an old show, but a classic, and I far prefer the original to the revamp. I remember really enjoying the characters, and the fights that would happen during the show and so was rather sad that it was another show that had been cancelled when I wanted to know how it ended.

When I recently saw this in my local DVD store I just had to have it, I have always had fond memories of the original Battlestar Galactica series, and it seems unlike alot of people I also do like the current incarnation of this classic Journey across the stars saga. But I digress we are talking about the original 1979 classic a good series dumped before it's time (wait a minute where have I heard this before?) And although the story line does not get finished in this series it has continued on in a line of books, some even written by the star of the show Richard 'Apollo' Hatch (Who now coincidentally is appearing in the SciFi Channel remake of Battlestar Galactica as Vice-President Tom Zarek).

Now that I have rewatched all 24 episodes of this groundbreaking series I still can't understand why this was dumped as suddenly as it was, but I guess like many good SciFi shows it's not until they are gone that people realise just how good they were. Now while the effects in this series are looking dated now (and of course the standard use the same shot many times over to save on production costs) in their time they were state of the art, done by one of the great masters of special effects John Dykstra, and now with the added 5.1 soundtrack it's even better that before.

If you are one of those people who loved the original series then this is the set for you, and the extra 3.5 hours of deleted sences, outtakes and interviews it makes it an absolute must.

The classic Grimms fairytales come to life like never before in this dark and imaginative (Mike Ayers, CNN.com Entertainment) supernatural series from the producers of Buffy the Vampire Slayer and Angel.

Portland homicide detective Nick Burkhardt (David Giuntoli) discovers hes descended from an elite line of criminal profilers known as Grimms, who are charged with keeping balance between humanity and the creatures of myth. With newly ... more...