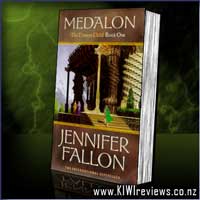 "According to the heathen legend, Lorandranek, the last king of the Harshini, sired a half-human child. They call him the demon child ..."

The Sisters of the Blade rule Medalon with an army of elite Defenders to enforce their oppressive rule. R'shiel Tenragan and her half brother, Tarja, find themselves caught up in the political intrigues of the First Sister - their mother Joyhinia. R'shiel is to be shipped off to a neighbouring kingdom and Tarja has been imprisoned.
Together they escape the Citadel and travel into unknown parts ofthe realm. They hear rumours that the magical race of Harshini is not extinct and a Harshini outcast, Brak, is searching for the demon child. Caught up in a rebellion against the Sisterhood, they cross paths with Brak, reluctantly becoming involved in his quest, and setting in motion a chain of events that none of them can control.

The Legend of Sigurd & Gudrun
Rating: 7.5

I started reading Medalon after completing Fallon's "The Hythrun Chronicles", and the story runs smoothly between the two series.

The plot is paced such that it keeps the reader on edge, but still allows for more than adequate development of storyline and character.

Fallon's writing style is fluid, exciting and draws the reader completely into the storyline. I called in sick at work to finish the trilogy. Parts of the story can be a little repetitive, but it's not a major detractor.

I bought a second copy of Medalon after realizing that I would probably read the first until it fell apart - it was just THAT awesome. I really would suggest reading The Hythrun Chronicles trilogy first though, because there are small parts of the story that make much more sense.

Definitely one of the best fantasies in bookstores at the moment.

When I first read the blurb of this book, I wasn't too sure if I'd enjoy it, but with it being fantasy, I figured I might as well give it a go. Due to several interruptions (moving house, and starting a new job, among other things, are rather good for that ya know!!), it took a long time to actually finish- but it certainly was NOT due to it being a boring read!!! Medalon pretty much had me hooked by the end of the first chapter, and didn't let me go until the very last page- and even then, I was rushing to dive into Treason Keep, book two of The Demon Child trilogy. So definite frustration caused by having every day life daring to intrude on my reading time!
Magic mingles with politics, war, and even a hint of romance as the supposedly extinct race of the magical Harshini start to make an appearance, setting the Sisters of the Blade's teeth on edge as they set about using their Defenders to abolish any and ALL heathens in their search for the Harshini, completely oblivious to the presence of the "demon child" amongst them. After all- the demon child doesn't exist, does it?? It's only a legend!! Well, so they think. A mother turns against her children, while one of them learns they are not who they thought they were, and chaos becomes a regular event as the Gods decide to join in the fun. All of this mixes to create a thoroughly enjoyable book, which I'd definitely recommend for all who enjoy anything even remotely tasting of fantasy. You won't find dragons, or any other strange creatures- well, except for the demons that the Harshini and the Gods rather enjoy conversing and playing with that is, but you will find plenty else to keep you turning the pages!!

As the bloodied and weary galaxy faces battle once more, the Jedi take on the formidable task of bringing the last of the Empire into the light...

From the ashes of the New Republic - torn to shreds by the savage Yuuzhan Vong forces - the newly formed Galactic Alliance has risen, determined to bring peace to the entire galaxy. But first the Yuuzhan Vong must be contained once and for all. And so Luke ... more...